14 Things You Should Know about the Norwegian Breakaway

Norwegian Cruise Line has been feverishly building its brand for the past decade. What was once a side player in a big industry has evolved into a major name that's been betting it all on big new ships. .

The newly built Breakaway leaves from the Hudson River in Manhattan, just a few blocks west of Times Square, and she will call on Bermuda, the Bahamas, and the Caribbean, depending on the time of year. Manhattan has long been the home port of hand-me-down ships, so it's about time it got a cruise ship that was state-of-the-art.

So what is different about this cruise ship, and how can you navigate it? Frommers.com grabbed these images on our current cruise. Put aside that airbrushed brochure — this is what the ship really looks like.

The Waterfront makes the sea the show

You would think it wouldn't be a novel idea to be able to enjoy the sunset breezes while you enjoy martini, but on cruise ships, it is. Most cruise ships focus their energy inward, toward the center, wrapping guests in amusements. The Breakaway's simple and elegant innovation is The Waterfront, which uses outward-facing deck space for eating and cocktails. It's like a sidewalk café on the sea, and as cruises become more and more mall-like, it takes some of the claustrophobia out of an ocean vacation. 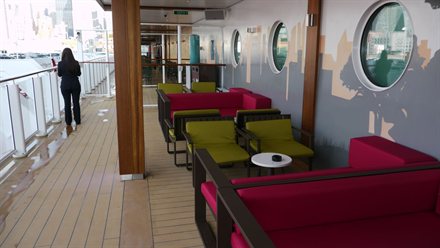 There are 28 places to eat meals

There's no main dining room on Norwegian, at least not in the traditional cruise ship sense. Your basic fare covers meals in the Garden Cafe, the expansive buffet-style restaurant with terrific ocean views on Deck 15, plus a few other outlets. If you want more, and you will, there are 28 total options, from celeb chef seafood (Ocean Blue by Geoffrey Zakarian), to noodles (Shanghai's Noodle Bar) to steak (Cagney's) to French (Le Bistro) to knife-juggling Japanese (Teppanyaki). It's a lot like being at the food court  — if the foot court had cloth napkins and table service. (Price check: A good many of them require cover charges of $20 to $30 per meal.) 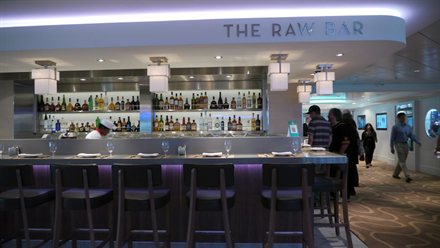 See those red and blue slides on the left? You stand in that chamber at the top, a trap door flies open, and you go zooming to your watery fate. There are five slides in total, but only two of them are that sadistic.  Fortunately, the fear factor is intense enough to keep lines reasonable. (Price check: Free) 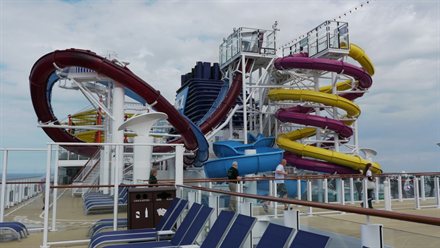 You can walk The Plank

There's a nine-hole miniature golf course, outdoor basketball court, and a rock climbing wall. Remember when people thought it was wild that a cruise ship would have a rock climbing wall? Now they're more common than shuffleboard. The Breakaway's contribution to the adrenaline arms race is the largest ropes course at sea. You clip in and run the route in safety. The spotlight dare is The Plank, a platform that pokes eight feet out over the side of the ship. Unfortunately, it processes passengers slowly, so expect a queue. 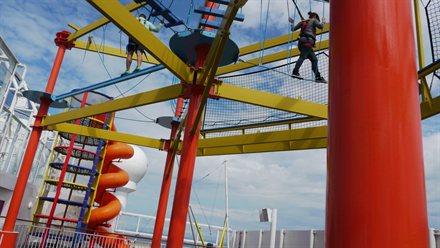 TV's Cake Boss sells his pastries on board

Buddy Valastro isn't on hand to personally make the lobster tails and cupcakes branded with his Carlo's Bakery in Hoboken, but I can vouch for the cannolis: They are crispy-shelled and fresh. You can get them in two locations on the ship. (Price check for a non-chocolate-dipped cannoli: $3) 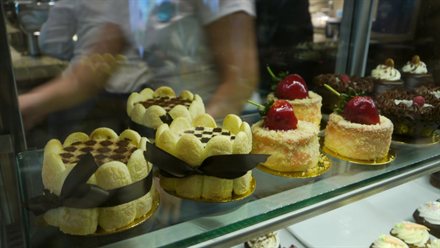 Whether this pool, plus a smaller one where the water slides end, will be ample for a ship loaded with 4,028 passengers will be something that only time and the heat of a summer Caribbean day will tell. The kids' splash zone, themed after SpongeBob SquarePants, adjoins it, so expect many kids with their families at this one. 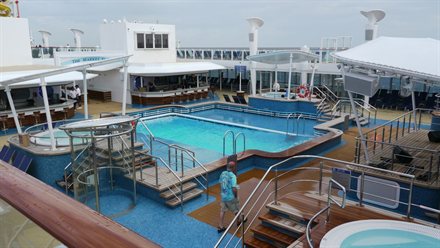 There are plenty of deck chairs

On either side of the pool area on Deck 15 there's a long and plentiful stretch of loungers on Deck 15. It repeats itself, with some staggered partitions to break the winds, one level up where there's sun. Both areas are within range of the live music stage that entertains sunbathers on good-weather days. For those who require a little more peace, head after and climb up a few decks. 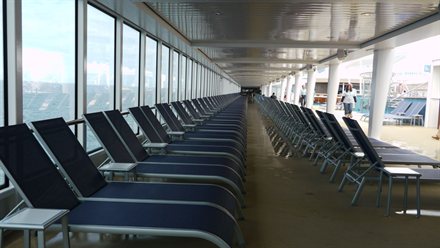 Bars are plentiful (of course) and fairly priced

Martinis in Manhattan routinely cost $12 to $18. On board this ship, they cost $8 to $10. Use that figure as a price yardstick for your favorite drink. 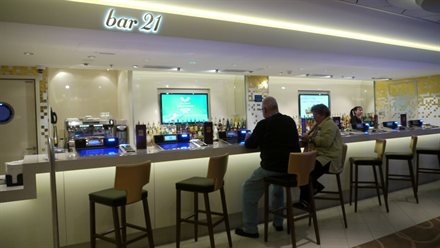 As on the Norwegian Epic, guests can reserve a time to slip on a parka and sip fruity cocktails from chalices made of ice in a chamber with frozen walls and ice blocks embedded with images of New York City icons — for example an ice throne sculpted to look like the Brooklyn Bridge. There's a one-drink limit, but it's so cold (17 degrees) that's all most people are good for, anyway. 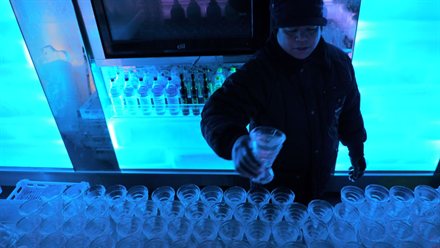 The Studio category is for solo travelers

Rather than pay double to occupy a traditional cabin alone, people who cruise on their own have a unique class just for them. If you can handle the look of this, you can handle a Studio. They can be made to adjoin other Studios for two single traveling together, and they come with a special cockatil-and-cookie lounge just for them. They're all interior. 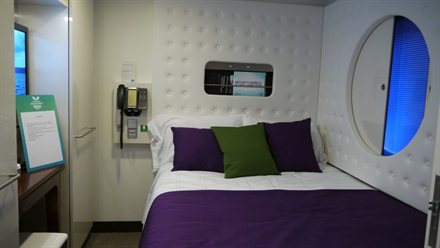 The Haven is a private first class section

The people staying in 42 special top-of-the-line suites on Decks 15 and 16 get a private bar, priority boarding, express elevator service, and a key to their unique domain. It also has a private two-level courtyard pool area plus two more whirlpools and a sun deck. 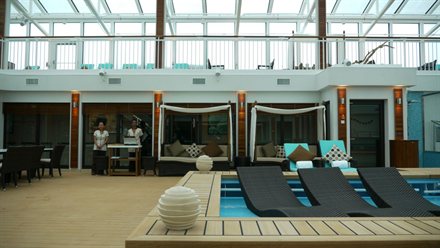 The frisky 1980s hair-band tribute musical even shows up on the poker tables in the casino. Rock of Ages is a ribald choice for a cruise line — most stage shows that wouldn't challenge a kindergartner. But cruise passengers are notoriously unfocused audience members, and the performance I caught captivated them and brought them to their feet. The risk of going PG-13 with its entertainment pays off in positioning Norwegian as the line that is as contemporary as its customer base. The show is certainly no less sinful that what happens in the casino. Next year, on its upcoming Getaway, a production will be a slimmed-down version of the musical Legally Blonde, which during its Broadway run cast a lead via a show on MTV. Norwegian is skewing young and hip; could The Book of Mormon be far behind? 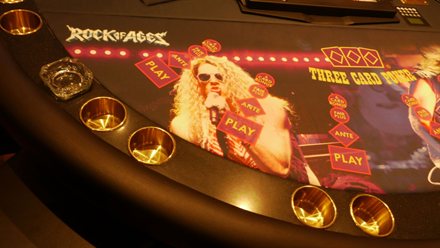 It's two tiny lanes, but that counts. O'Sheehan's pub (named after the CEO, who's of Irish descent and presumably thought his name should go on his ship's bar) encompasses a big chunk of Deck 7, and it's packed with pubby pursuits such as darts, arcade basketball, and video games — and there's a separate video arcade for kids on an upper deck. The coolest diversion there, though, is this. (Price check: $5) 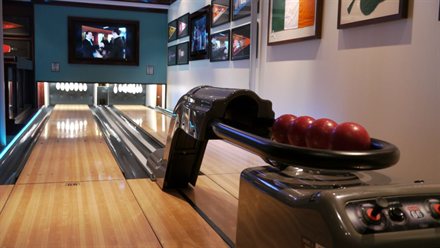 NCL's CEO Kevin Sheehan has been honest about how he views the staterooms: He wants them comfortable but he'd rather you didn't want to stay in them all day. All cruise lines want you out spending money, which is why the selection of TV channels is paltry (a few news channels, a lot of in-house advertising channels) and the best movies cost $10 to rent. (Late-night room pizza room service also comes at a price of $5 per 16-inch pizza.) 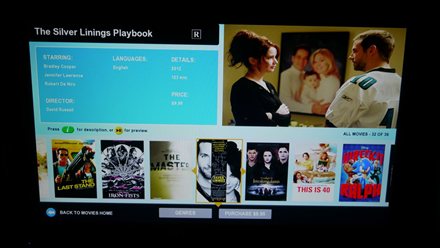 What else? On the second-to-last-night of each cruise, there's a fireworks show that the line says is environmentally friendly. There's a spa by Mandara, and a fitness center that, strangely, was laid out in two sections on either side of a corridor. And Bliss, the main disco, is a big barn of a room with a sticky floor and no nooks and crannies — not very sexy.

The ship can be relentlessly in-your-face with music and up-charges. You rarely find yourself away from TVs advertising the various on-board enticements. Sometimes it seems the only quiet place is in your cabin. But that's a hazard of all mass-market cruise lines today.

The bottom line is that the Breakaway success at what it's trying to do, which is be many things to many types of customers who come to eat, drink, party, and tan.