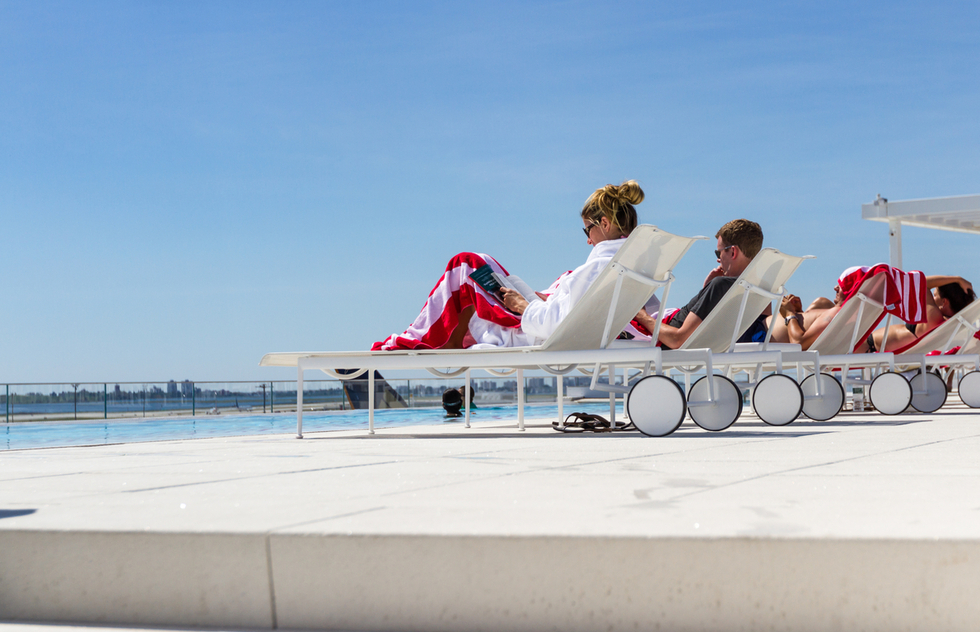 $25 to Use the Pool?! Airline-Style à la Carte Fees Land at Hotels

Airlines have perfected the art of nickel-and-diming customers with extra charges for services and amenities that were once free, from checking a bag to getting an onboard snack.

The strategy has proven lucrative, generating tens of billions of dollars in ancillary revenue for airlines, even during 2020, when hardly anybody was flying due to the pandemic.

MCR Hotels, which owns more than 100 properties across the U.S., is reportedly trying out a new fee system at about a dozen of its holdings, including New York City's High Line Hotel and the mid-century modern TWA Hotel (pictured above) at the city's John F. Kennedy International Airport.

Some of those prices apparently change by the day. The pool will set you back $25 on weekends, although Good Morning America reports that pool access is free during the week. (Talk about your missed revenue opportunities—Spirit Airlines would charge by the lap.)

Granted, plenty of hotels already charge guests extra for services such as Wi-Fi and breakfast. Not to mention the pernicious "resort fee" scheme whereby hoteliers tack on upwards of $40 to your nightly rate for access to spa facilities and business centers you might not even use.

At least under MCR's plan, guests will only pay extra fees for amenities they partake of—even if those amenities have been widely regarded as gimmes for ages.

News reports suggest that MCR is lowering nightly room rates to offset the new fees, indicating that guests who steer clear of any conceivable perks might actually save money, somewhat like an airline passenger who buys a Basic Economy ticket and doesn't try to pick out a seat ahead of time or stash a carry-on in the overhead bin.

If room rates are being lowered, that would have the advantage of placing MCR's hotels higher in many hotel search engine rankings and hiding a portion of the true cost of a stay.

But it's unclear by how much MCR plans to lower the base rate for rooms, and company reps have not, as of this writing, responded to our requests for clarification.

The hospitality industry has of course been hit hard by the pandemic, and, as the Wall Street Journal points out, revenue isn't expected to return to 2019 levels till 2024.

But Fortune magazine asserts that big hotel chains such as Marriott and Hilton are reluctant to recover pandemic losses through ubiquitous fees for fear of "extensive customer pushback."

Airlines may be able to get away with going fee-crazy because they know customers have relatively limited options when it comes to flights. But there are a lot more lodging alternatives in the marketplace—from other hotels to vacation rentals to campgrounds.

Still, the pandemic has upended other hospitality norms, such as daily housekeeping in guest rooms.

At least one hotel executive reached by the Wall Street Journal seemed to approve of the properties experimenting with charging overnighters who'd prefer to have that once de rigueur privilege restored.

“It shows the consumer is willing to pay for it,” Kerry Ranson of HP Hotels is quoted as saying, “and for years we’ve been giving it away.”

If the hospitality thing doesn't work out, sounds like he has a bright future in aviation.