5 Capitol Reasons to Head to Washington, DC in the Next 6 Months

The United States Congress may be in a constant gridlock, but nothing stays the same for long in the United States’ Capitol. Here’s what visitors to this always-fascinating city can look forward to if they make the trip in the next six months.

1) Most important development is a new form of National Mall transportation that will allow visitors to traverse this massive expanse of monuments and lawns far more easily and efficiently (previously most tourists simply hoofed it). In spring of 2015, the Circulator Bus (cost $1 per ride) started a new loop from Union Station to the National Gallery of Art, the National Museum of American History, the Washington Monument, the Lincoln Memorial, and 10 other sights of touristic importance. Those who buy a SmarTrip card, rather than paying in cash, get a free second ride if they re-board within two hours of their first ride.

2) It’s as difficult as ever to get tickets for the White House tour, but thanks to a complete re-do of  the White House Visitors Center (free and open to all) that is now a much more worthy second choice if you don’t get into the house itself. It now features a downright fascinating 14-minute film on the private lives of the First Families, along with interactive exhibits on the architecture and décor of the White House and approximately 100 artifacts. For information on the center, go to http://www.nps.gov/whho/planyourvisit/white-house-visitor-center.htm

3) In November the Smithsonian’s decorative arts and crafts hub The Renwick Gallery will reopen after a two-year renovation of its landmark, Belle Epoque–style mansion. The inaugural exhibit, Wonder promises to be a, well, wondrous examination of the museum’s founding mission “to encourage American genius”.  Nine bold-named contemporary artists have been commissioned to create site–specific, room–sized works in unusual materials. Early reports are that the artists have chosen to create their pieces with woven wood, netting, glass marbles and even insects. It should be a fascinating show. As with all of Washington’s Smithsonian museums, there is no entry fee for the Renwick. For more information, go to http://www.americanart.si.edu/renwick. 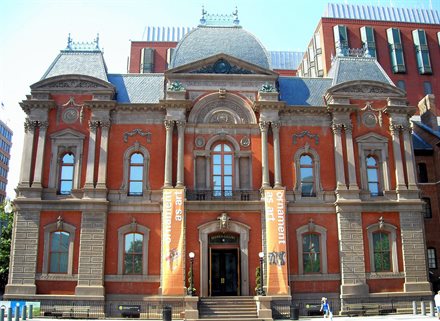 The Renwick Gallery (photo by NC in DC/Flickr)

4) On that same crafty trajectory is the reopening, and significant expansion, of Washington’s nearly century old Textile Museum. In its move to the campus of George Washington University, it has tripled its space, allowing it to stage such blockbusters as its current show “Unraveling Identities: Our Textiles, Our Stories” which displays more than 100 pieces spanning 3,000 years and five continents. The exhibit, open now, tackles the subject of how clothes, adornments, and fabric furnishings interact with identity and status across cultures (and its far less dry than that sounds).  Suggested donation for entry is $8. To learn more, go to http://museum.gwu.edu.

5) Finally, tourists will have a lot more choice on where to bed down, as DC has been in the midst of a hotel-building boom these last five years. New picks include one from presidential candidate Donald Trump (to be set in the landmark Old Post Office building when it opens this fall), a “pod hotel” where the tiny-size of the rooms will translate into small-for-Washington pricing, and properties in the up-and-coming neighborhoods of NoMa, Southwest Waterfront, Capitol Riverfront and Mount Vernon Square. Most intriguing? The infamous Watergate Hotel is slated to reopen soon. No word yet on how easy the room safes will be to crack. But hey, they fixed the plumbing!