A Free Trip to Paris? Fantastique! Including a Stay in a Purpose-Built Apartment in the Actual Eiffel Tower? Mind-Blowing

They said it wouldn't last.

The Eiffel Tower was built for the 1889 World's Fair and was only supposed to stand for 20 years after that event. Truth is, many in Paris wanted it torn down sooner, including a group of famed artists and authors (including Guy du Maupassant and Alexander Dumas fils) who demanded its leveling. Novelist Joris-Karl Huysmans went even further, calling it a "hole-riddled suppository".

But the miraculous happened: the tower not only remained in place well beyond the 20-year deadline, it became one of the most iconic structures on the planet, and a beloved marker on the Parisian cityscape.

I don't think any of us could imagine the city without it.

And another thing I couldn't have imagined, until this week, is the idea of being able to stay overnight in the tower. But that's exactly what four lucky groups of travelers are going to get to do, thanks to a contest just announced by HomeAway.com. The massive lodging company will be creating a chic apartment right inside the Eiffel Tower, with room (and beds) for up to 6 people. Each group will be given a one-night stay (with on-site breakfast and dinner), plus three nights in another HomeAway apartment rental, and airfare to Paris from travel partner Expedia.

To enter the contest, just go to: www.homeaway.com/info/eiffel-tower. There you'll have to say, in 140 characters or less, what you would do if the Eiffel Tower Apartment was all yours for the night. The deadline for entry is May 31 at 11:50pm ET. (NOTE: Please see update below).

So why am I telling you about all this? Well, I was so enthralled with this idea that I've volunteered to be one of the judges. So I'll be reading your entry (though mentioning Frommer's won't help—in fact, it could get you disqualified!). I'm also thrilled to be able to announce that I'll be flying to Paris to help announce the winners on June 10 and give out Frommer's Day by Day Paris, so that when the travelers are able to tear themselves away from the spectacular view, they'll have some idea of what else to see in the City of Light. 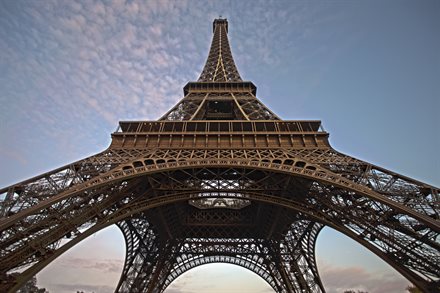 IMPORTANT NOTE: The contest was so popular that a "Second Chance" has been added for those who didn't win in the first round. Go here for more info: https://www.homeaway.com/info/loveaway-sweepstakes