We're proud to present a guest post today by David Paul Appell of Tripatini.com. David is also the author of the upcoming Frommer's EasyGuide to Miami & Key West, which will be hitting bookstore shelves in November. A brilliant book (if I do say so myself), written by a longtime resident of Miami who clearly loves his city, it will introduce you to sides of Miami that you've likely never encountered before. As will, we hope, this blog by him. So here goes:

As one of America’s most popular vacation destinations, there’s always something new in the pipeline down here in South Florida – and Miami/Miami Beach in particular. So here are the top developments of the season. And you might be interested to know that several of them have nothing to do with the beach at all, but rather – gasp! –with culture.


A series of initiatives and public-private partnerships in recent years has been aiming to evolve Greater  Miami  into a world-class cultural destination, and has already given us the likes of downtown’s Arsht Center and the Frank Gehry-designed New World Center in South Beach.

And, now it’s the turn of the museums. In early December we’re going to see one of the highest-profile art museum debuts in America, opening during our annual art-fair extravaganza, Art Basel Miami. The former Miami Art Museum is relocating, hugely expanding, and taking up residence as the first inhabitant of the downtown waterfront’s brand new Museum Park. It’s mostly publicly financed, but a minority investment by our local Donald Trump wannabe, a dude named Jorge Pérez,  somehow bought him the right to slap his name on it, so it henceforth shall be the Pérez Art Museum.

But in any case, there’s no question the design is spectacular and the contents will be world-class, so The Jorge should be very much worth a culture-vulture swoop. More info: www.pamm.org.

And now the new Museum Mile Cultural Pass will set you back $21 but save you far more than that in discounts on admission to these museums–and  that’s not even counting additional discounts of 15 percent or more at 20 popular Miami Beach restaurants. More info:  www.smartdestinations.com .


Another discount deal worth noting is that October is Miami Attractions Month, with two-for-one admission at some of county’s coolest attractions, such as the family-oriented Jungle Island and Metrozoo; the delightfully quirky Coral Castle; the iconic Seaquarium; and the wonderful historic mansion Vizcaya. As you can imagine, that can really make a difference in a family’s budget.  Of course, we’re practically in October already, so if this is too short notice this time around, do keep it in mind for 2014. More info: www.miamiattractionsmonth.com.

One increasingly fun and popular area of mainland Miami (as opposed to Miami Beach) is called Midtown, which unsurprisingly is located a few minutes north of downtown. Once a gritty few blocks between Interstate 95 and Biscayne Boulevard anchored by a huge rail yard, its redevelopment in the last several years has turned it into a shopping, dining, and nightlife destination, as well as home to a a bit of an art gallery scene as an overflow from Wynwood immediately to its south.  Midtown dining options range from upscale to budget.

Also in this area, an outfit called Miami Culinary Tours has a new offering, a food tour covering Wynwood, Midtown, and the nearby Design District. It’s $89 a person, but I think a pretty good value because it feeds you enough great food for two meals over the course of 4 hours and 5 stops. Plus there’s the option to tool around in a colorful party bus of the kind you see tooling around some cities in Colombia, called a chiva. Good times…  More info: midtownmiami.com, www.miamiculinarytours.com.

Finally, one notable lodging note. When it comes to budget offerings, Miami ain’t exactly swimming in ’em – and that goes triple for downtown, which is mostly a business, not beach destination – but it’s also very central for touring and the area most convenient to the cruise port. So this year’s opening of the B2 Miami  Downtown Hotel has made a real splash. It’s a very sleek  boutique high-rise with 243 rooms starting  at just $129, an amazing bargain for the quality and location – plus a very good contemporary-comfort-food restaurant, Biscayne Tavern, from Jeffrey Chodorow of China Grill fame. There’s also, by the way, a huge B Ocean resort in Fort Lauderdale. More info: www.bhotelsandresorts.com/b2-miami-downtown 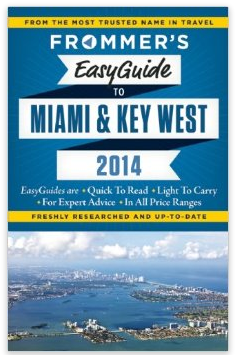