A La Carte Cruise Pricing To Become Even More A La Carte, At Least on Norwegian Cruise Lines

Start boning up on your math. You're going to need those calculating skills to determine which cruise vacation will now have the overall highest costs.

I reported last week that Celebrity Cruises was drastically changing its pricing structure for all sailings through spring of 2017.

Today, Norwegian dropped a bombshell of its own. It will be charging by the item at some of its a la carte restaurants, rather than having cruisers pay a flat fee for their entire meal. The initial roll-out of this plan will  apply to two of the restaurants on their ships (the steakhouse and the Italian joint), but my educated guess is that if this increases revenues, it will likely be applied to all of the restaurants that Norwegian doesn't include in its basic package. I'd further predict that the other cruise lines are watching this experiment carefully, to see if this is something they'd like to try.

So will cruisers end up paying more for their meals? That will, of course, depend on how much they order. But since most cruisers overeat on the high seas (the average wait gain for a weeklong cruise is 4 pounds!) I'm guessing they will. To take the steakhouse, as an example. Currently, passengers pay a flat $29.99 to dine at NCL's signature steakhouse Cagney's. Under the new system they'll pay between $4.99 and $7.95 per appetizer, and $17.99 to $29.99 for an entree. That'll add up quickly, don't you think? 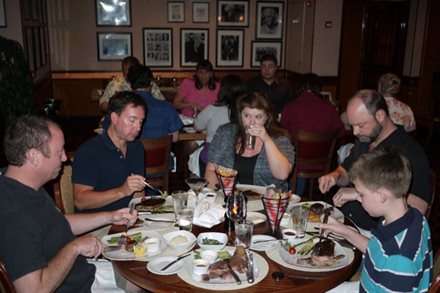 Cagney's Steakhouse on the Norwegian Dawn (photo by Brent Ozar/Flickr)

The new program will roll out in October on the new Norwegian Escape, and line-wide in January.