In 1909, San Diego was a little city with really big ambitions. It decided to throw a world’s fair in 1915 to celebrate the opening of the Panama Canal, which would make it the first U.S. city reached by ships after making the passage. San Diego would be the smallest city ever to host such an international event. And it would do so over the strong objections of neighboring San Francisco, which was 10 times its size and already had its own expo planned.

President William Howard Taft was enlisted to support San Francisco’s fair and soon all federal and state financial support had been withdrawn from San Diego’s exposition. The small city pressed on nonetheless, and in six years transformed urban, 1400-acre Balboa Park from a barren, treeless desert, inhabited only by coyotes and rattlesnakes, into a fanciful wooded wonderland, filled with elaborate, miniature castles that delighted fairgoers.


That act of chutzpah—and artistry—is being feted this year, with yearlong 100th anniversary celebrations and special exhibitions. And from my recent visit, I can tell you that Balboa Park, and the city of San Diego, has never looked better. 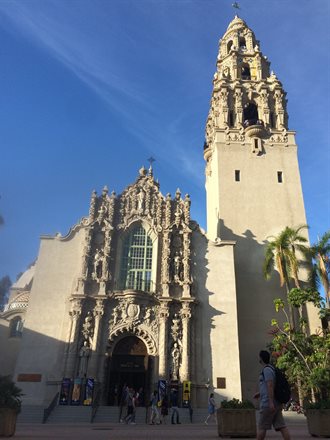 Although the exuberantly ornate Spanish Baroque buildings that house the park’s many museums, theaters, and culture centers aren’t the originals built for the exposition (they were in such disrepair they had to be replaced in the 1970s), these replicas are spectacular nonetheless and have been polished to a high gleam this year. They also house wonderfully quirky institutions where the values of bygone eras are lovingly maintained.

The Museum of Man unselfconsciously displays huge fake Mayan stellaes and a hairy sculpture of a Neanderthal man created by, and donated by, Playboy Enterprises (apparently this butch sculpture was used in some sort of movie). While there is real evolutionary science explained at the museum, it’s done in delightfully hokey “gee whiz” fashion, with wall panels wondering whether man’s next evolutionary stage will be from human to robotic.

The Mingei Museum, which was created to “celebrate human creativity,” is another happy mishmash with displays ranging from serious architecture exhibits  to cases containing such delightful oddities as airplanes crafted from Coke cans and exquisite 18th-century doll houses and toy horses. If you can’t find something to stir your soul here, you may not have one.

Balboa Park also houses what is, arguably, the world’s finest Zoo (the San Diego Zoo), a place that grown-ups will enjoy even without kids in tow; a world-class art museum; the esteemed Old Globe Theater, and much more. All of these institutions have special surprises planned for this anniversary year.

One could argue that San Diego became a tourist lure thanks to Balboa Park, but today there are many other parts of the city worth exploring, too (not to mention the wonders of neighboring La Jolla and the other beach towns). A highlight of any visit is the USS Midway Museum, which explores that key World War II naval battle. The highlight there is scrambling all over an actual aircraft carrier. The ship was completed just two weeks after World War II ended but served in other wars, including as a rescue and naval cargo ship. Well-spoken docents, most of them former naval officers, are positioned around the boat. Strike up a conversation: they have a lot of tales to tell. 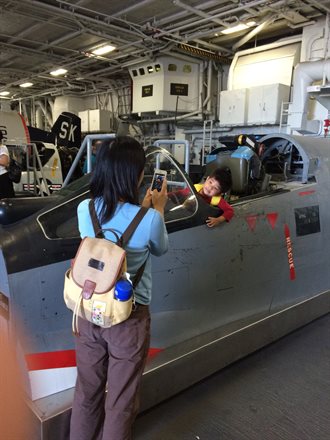 And the Gaslamp Quarter, a neighborhood of rowdy bars, good restaurants and dozens of stores of all sorts, gives New Orleans' Bourbon Street a run for its money on the weekends. That’s when an outdoor party erupts with street magicians and musicians, bicycle rickshaws blaring pop music and 20-somethings teetering from dance clubs in patent leather, five-inch heels.

So let’s say a big thank you to last century’s steadfast city fathers: without your stick-to-itiveness, San Diego wouldn’t be nearly as vibrant or vital as it is today.

Tip: If you plan to visit more than 3 attractions in Balboa Park, get the $45 Museum Pass which allows unlimited access to all the park’s museums (but not the Zoo).