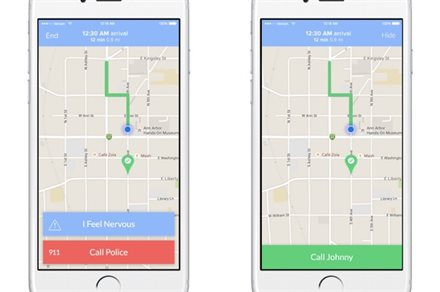 And that’s not a comment on shopping habits or boozy pub crawls.

For women, especially solo travelers, safety is always front of mind, a concern that can influence the destinations we pick, the routes we take and the activities we participate in. Because of that, I’ve always been a bit jealous of the carefree male travelers I see, men who seem to just stride out into the world with few second thoughts, and fewer second guesses when they engage with strangers.

But today I downloaded a new app onto my phone, one that just might allow me—and other solo female travelers—a smidgen more peace of mind on the road.  It’s called Companion, it’s available on both IPhones and Android, it’s free and it’s a darn smart tool.

Here’s how it works: when you’re leaving a place alone, you simply key in the address you’re heading to and pick a contact from your list of friends and family. That person then acts as your “virtual companion” along your journey; they’ll be able to see on a map where you are, and will be alerted when you arrive safely. Your chosen companion doesn’t have to have the app on their phone for this to work, but they will have to consent to being “on watch”. If they don’t hit “yes”, you’re alerted, so that you can pick someone else from your contacts list.

Then, you simply put the phone in your pocket or bag and head out. You don’t have to check in with the app in any way—that would be counterproductive. Instead, you keep an eye on your surroundings.

But while you’re walking, the phone is checking in with you. If you suddenly veer off the route, start to run, get shoved, have your earphones pulled out or start going more slowly than you likely would, Companion alerts you that it has noticed something going wrong. You then have 15 seconds to tell the app all is OK before it alerts your contacts, and the local police, of a potential problem.

(Because the makers of the app hope to help police forces identify problem areas for solo walkers, they encourage users to register areas where they feel unsafe; those are then collected by the app and shared with the authorities.)

Right now, the app works anywhere in the world for friends to trace other friends’ routes, though the button that alerts local police is only available in the United States. But that will change imminently. According to co-founder Lexie Ernst the company is working hard to add that feature, which he says it will be available “in a few weeks”.

“We have seen many travelers use this app!” says Ernst enthusiastically. Noting that the app was first developed for students he continues. “Many people studying abroad have used it with their family and friends in the U.S. and in other countries.”

My guess is that thousands more female travelers will be using the app soon, as well. I know I will be.