On June 29, the most lavish of America's four final homes for the former space shuttle orbiters will open. The Atlantis will admit visitors on the very grounds where it launched 33 successful missions over its lifetime. I was given a special preview of the 90,000-square-foot Atlantis Orbiter Home — and it's gorgeous.

Some aspects of the permanent display are still under wraps, but the core of the show, the magnificent shuttle, is already installed. To get the orbiter inside without damaging it, KSC half-built the building, wheeled her inside, and built the wall behind her.

Hanging 26 feet off the ground at an angle of 43.21 degrees (like the numbers in a launch countdown), Atlantis now tips a wing at everyone who comes to learn about her on the many interactive displays that surround her. A live webcam gives a view of the cavernous, multi-level exhibition hall.

Space dust still coats her wings and her bay doors yawn open for inspection. Every aspect of the shuttle's operation has been thoughtfully translated into a kid-friendly activity, from the huge two-level slides for kids that approximate the angle of its re-entry into Earth's atmosphere to a game in which kids appoximate engineers' chemical challenges by stamping out "bad" molecules. Outside, full-scale replicas of the solid rocket boosters and external tank form a 184-foot-tall gateway for everyone who enters the building.

The other displays of decommissioned shuttles (in Washington, Los Angeles, and New York City, plus a training model in Houston) are nice, but KSC's facility will be the most elaborate, and it's associated with a complex that is already an American treasure.

The addition of Atlantis should also be a watershed moment for Kennedy Space Center. Now that manned missions are no longer being flown from there, tourists mostly have their run of the place's biggest sights, including launch pads that were formerly off-limits. It deserves to rejoin Disney and Universal as one of Florida's greatest American tourist sights — in the 1970s, it was a king among tourist sights, but today, our achievements in astronautics are already being forgotten. The Magic Kingdom, which never sent anyone into outer space, currently draws 11 times as many annual visitors.

Admission to Kennedy Space Center is $50 for adults and $40 for kids aged 3 to 11 and includes various launch pads, rockets, the Vehicle Assembly Building (one of the largest on Earth), and historic areas and could take all day. Even before Atlantis was installed, a visit could take a whole day. 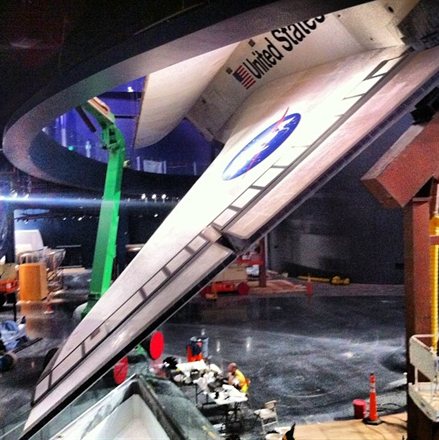