A Travel Memoir for Today: Gloria Steinem’s "My Life On the Road"

I never thought I’d use the words "Gloria Steinem" and "travel memoir" in the same sentence. Somehow the idea of one of the most important leaders of the 20th century couching her life story in a genre that too often has to do with, well “quests” to find the perfect quesadilla, or fix up a house in Tuscany, seemed ludicrous. But as she’s been doing her entire career, Ms. Steinem turns expectations on their head—and finds a deeper meaning in an activity that is all to often dismissed as trivial.

In fact, she starts her book with a resounding endorsement for the act of wandering. "When people ask me why I still have hope and energy after all these years I always say: Because I travel." And from there she goes on to show that she has, in fact, been a nomad from her earliest years, when her peripatetic father dragged the family across the country hither and thither in a car or in a house trailer, as he bought and resold antiques (sometimes using the young Steinem to gain sympathy—and a higher price—from a buyer); to years as an organizer, when more than 50% of her time was spent suitcase in hand.  Along the way, she meets extraordinary women and men, embeds herself deeply within the struggle for civil rights and the rights of Native Americans, and is a key participant in an event that many have now forgotten—the National Women’s Political Caucus—that solidified many of the issues the American Women’s Rights movement went on to achieve….or are still fighting for today. 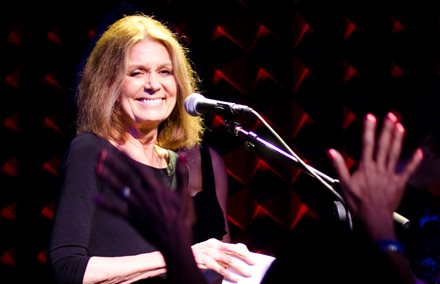 
Surprisingly, Steinem spends little ink on the founding and running of Ms. Magazine. But then, the book doesn’t follow the tired “then I did this, and then I did that” formula of too many memoirs. Instead Steinem groups categories, like campus visits or public transportation, together to make a point about how ideas are passed and shaped in group meetings (or as she calls them "talking circles") and person to person.

She also spends considerable time on the issues of travel itself, delving deeply, for example, into the battle that flight attendants waged to professionalize their industry and rid it of the indignities—like less-than-safe working conditions and ad campaigns with the words "Fly Me" and the picture of a "stewardess"—that trivialized an entire class of working women.

Ultimately, Steinem’s book is about reclaiming the road for women. In the introduction she writes "My last hope is to open up the road—literally. So far it’s been overwhelmingly masculine turf. Men embody adventure, women embody hearth and home, and that has been pretty much it…..When women did travel, they seemed to come to a bad end, from the real Amelia Earhart to the fictional Thelma and Louise."

Steinem’s book shows the opposite: that travel is the road to self-actualization and to personal freedom, for women in particular. And frankly, after reading about Steinem’s adventures and encounters away from home, a life of travel has never sounded as good. I guarantee your wanderlust—and understanding of many of the seminal events of the last century—will be expanded by this wonderfully enjoyable and instructive book. I can think of no better way of starting the new year than giving it a read.