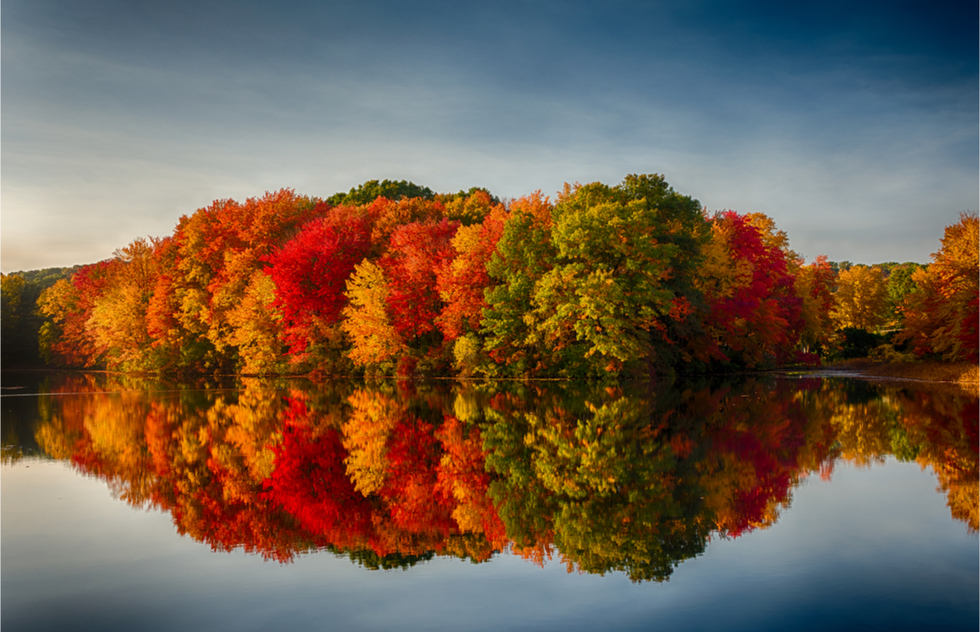 In Homer's Iliad, Thetis, the mother of Achilles, foretold two diametrically opposed fates for her son. He could either die young but achieve great glory in the process or live a long but obscure life.

The folks at NewEngland.com have put forth two similar predictions for leaf-peeping season this year.

Jim Salge, who has spent years forecasting foliage for Yankee Magazine, thinks the 2020 autumn season will either be short but intensely vibrant or longer but a bit more ho-hum color-wise.

The unknown that could push the crank one way or the other? Early autumn weather patterns.

"We had a strong start to the growing season, but then came an extremely dry, hot summer," Salge writes on the site. "In drier years, leaves tend to turn a bit early and their color is often short-lived. Fortunately, there’s still potential for a big color punch this year if the right weather scenario lines up."

The Be Glorious But Die Young model will come about if there's an early cold spell. This year's summer drought has concentrated more sugars in the leaves. If we see cold early on, perhaps if La Niña pushes in some cold fronts, that could lead to the leaves quickly turning intense colors, though they'll fall off the trees more quickly, too.

Should the weather remain warm well into autumn, leaves will turn later and remain on the trees longer, meaning more folks will be able to see them. The downside will be less dynamic colors.

Bugs and fungus can also affect the leaves, but thankfully, in 2020 the weather patterns haven't been conducive to large fungal growths (except in far southern New England, according to Salge). While there are caterpillar infestations in some parts of the White Mountains of New Hampshire, the problem seems to be localized rather than widespread.

"Foliage is a continuum, and the color builds and fades through peak," Salge told me in an email. "The wave of color takes many weeks to work across New England. This year, because of the drought, and other factors, we believe that that wave of color will move through earlier than traditional peak times."

So what does that mean for those trying to plan trips? Again, it will depend on where you're going. If you're look at the White Mountains of New Hampshire, traditionally that peak goes from last week of September into 2nd week of October. So to see the most vibrant color the weekend of Sept.26 into Columbus Day would be the norm, says Salge. But if the drought holds—and drought moves things along faster—it would be smart to shoot for weekend before Columbus Day. Farther north, in say, Maine you'll want to move up your trip to a week or two before that.

It almost goes without saying—so I'll say it—that like all outdoor and driving-based activities, leaf-peeping lends itself well to social distancing. Many of the season's traditional festivals may be canceled, and some museums, hotels, and restaurants will be shuttered. But there will still be enough pulchritude to reward road trippers. NewEngland.com has always been a reliable resource for daily foliage reports and leaf-related news in the American Northeast, so I recommend consulting the site as autumn unfolds.

Oh—and because Thetis was a goddess, she didn't just tell Achilles that one of two fates awaited him. She made him choose. He went for the glory, and epic poetry would have been far duller if he hadn't. We're kind of hoping the leaves go the glorious route, too. But they don't get to choose.

What would your choice be—in both life and leaves?