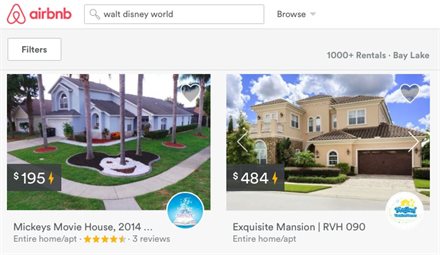 This summer, Airbnb began slipping a new type of homes into its search results: Ones resulting from a partnership with professional home rental companies, not ones offered by everyday citizens with an extra room to rent.

In what could be viewed as a departure from its original mandate to enable the crowdsourcing of hospitality, in a few test markets including Orlando, Airbnb is hand-selecting partners to diversify its inventory, moving away from private residences and toward properties that have never seen a permanent resident. People who book these rentals won't be greeted by a homeowner or resident but by a worker of a home rental company.

One partner Airbnb has selected for immediate integration is LiveRez, a popular software that property management companies use to capture reservations—in doing so, Airbnb avoids having to make individual deals with home rental companies, instead ingesting properties from dozens of companies at once.

As it stealthily moves into this territory, Airbnb is taking on established home rental sites such as HomeAway, where professional management companies take bookings for their properties. If the project continues, Airbnb stands to grow its presence in destinations such as beach towns and ski resorts, where full-time rental properties are common.

The change, should it go nationwide, also hedges Airbnb's bets in cities such as San Francisco, New York, and Santa Monica, where tighter local laws are making it harder for homeowners like you and me to rent their own properties.

Property managers would benefit enormously by having their inventory appear on a portal as powerful as Airbnb. But at the same time, entrepreneurial homeowners who rely on the site to make a few extra dollars could be bumped out of the running if their mom-and-pop spare rooms begin to seem less attractive when compared to professional for-profit properties.

Should Airbnb manage to fully integrate vacation home rentals with its crowdsourced listings, it stands to become the single-most powerful lodging booker for non-hotel choices—the Amazon of rentals covering every sector of the industry.

With such fundamental redefinition underway, I reached out to Airbnb to ask about the shift, where it will be implemented, and how it will balance "sharing economy" lodgings with results generated by established businesses. Airbnb declined to comment.

This might be partly because the change could put everyday people with rooms to rent in a weakened position. It might also be because, as the Wall Street Journal put it in a preview piece on the move, "the shift could arouse concerns among hoteliers that the startup is competing for their clients without being subject to the same regulations or paying the same taxes."