USA Today reports that Disney is the latest cruise line to ban smoking on its stateroom balconies, joining Celebrity, Princess, Oceania, and Crystal.

I'm all for the ban. Not because it's not very "Disney" (Walt himself was rarely seen without an unfiltered Lucky Strike in his hand) but because it's dangerous and rude. Every cruise ship's lifeboat drill contains a captain's warning not to toss cigarette butts overboard because they may blow back in and start a fire. First, the fact cruise lines feel the need to tell smokers not to throw their rubbish everywhere says a lot. Second, and most crucially, if there's that much risk, why allow smoking on ships at all?

I direct this to Carnival, Norwegian, and Royal Caribbean, the biggest mass-market cruise lines that still permit smoking on balconies: Countless mornings and sunny afternoons on my stateroom balcony have been ruined when a smoker lit up many cabins away. Cabin balconies are not private. They are shared space, and smoke from one travels in every direction and even into cabins if the doors are open. You already ban smoking inside cabins because it ruins fabric. Please ban it on balconies because it ruins the enjoyment of an amenity we paid for.

Cruisers who do not wish to inhale smoke (and in cruising, especially, there are many elderly patrons who have medical conditions that forbid it) should not be in a position of evacuating their balconies to get away from it. In fact, in a confined space such as a ship, no one who wishes to breathe clean air should be near potential cigarette smoke, which is why cruise lines already ban smoking in public areas.

There comes a point where we have to admit that smoking has become an anti-social behavior and should be indulged far away from the majority of society, which has made a choice not to be exposed to it. On a cruise ship, there is already a designated area for noxious fumes, and that's the smokestack. I sometimes feel about smokers the way I feel about small children: They are to be socialized, not indulged, and I should not be forced to experience the world on their narrow terms. They have to figure out how to live with the rest of us. As with small children, that expectation may invite a few tantrums, but eventually they'll grow up.

There is no place for smoking anywhere it might mar a vacation that a non-smoker has paid for. 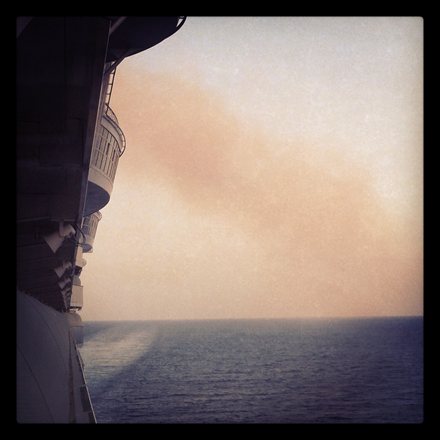