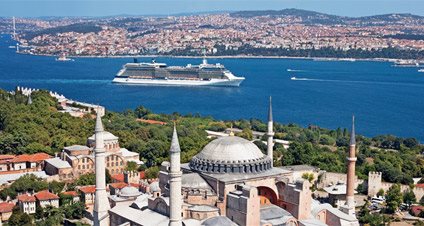 There's no need to be complicated about this answer.

This week, Disney Cruise Line announced that it will no longer stop in Greece, Turkey, or Malta on its upcoming 12-night Mediterranean voyage of the Disney Magic. When asked why, a spokesperson told Frommer's, "We regularly review our itineraries and occasionally make the changes needed to provide the best possible experiences on shore."

"Safety, of course, is very important to us, so we're of course looking at [the region] like the rest of the world is," the spokesperson said, adding that the company is "continually monitoring" the activities in the area.

Disney did not explicitly say why the ports were dropped. But earlier this year, Celebrity ended overnight stays in Istanbul, citing safety concerns.

Then again, neither one needed to. Anyone with a TV knows what's going on in the area, starting with the flood of migrants that visitors now find begging in the streets as they make their way to better lives. The migrant situation on land and in the water is a deeply distressing situation, but those people are not a tourist safety threat.

Ship security in a troubled region is a graver concern. Cruise ships are indeed soft targets, and there's not much that can be done to secure them. I myself was on a cruise ship in Turkey and Greece in late November—at ports that Disney has now removed—and to be sure, guards poured scrutiny on passengers as they boarded our ship, with each of us going through the ship's detectors. In Turkey, we passed through land-based checkpoints and metal detectors, too, for an extra layer of inspection.

Those checkpoints might do the trick if attackers always arrived through passenger doors. They may not. Attacks can easily come from the water instead.

You might remember an incident in 2000 when a speedboat laden with explosives rammed into the USS Cole, an American ship, killing 17 and injuring 39. And that was a Navy destroyer, presumably constructed to absorb such blows, and with the weapons to potentially prevent it. The human cost of an explosive rammed against a pleasure vessel that isn't fortified against explosives, such as giant cruise ship, has thankfully not yet been made manifest by reality. Short of sailing under the protection of an armed flotilla, there's not much that can be done to thwart an improvised attack of this kind. And that just one scenario that makes cruise ships so vulnerable.

Fact: The Gatestone Institute, a non-partisan international policy organization, has determined that ISIS intends to make the Mediterranean a battleground, using Libya, which is just a few hundred miles from Europe, as a base.

Fact: The RAND Center for Terrorism Risk Management Policy explicitly outlined not only several methods by which a cruise ship could easily be attacked, but also the high likelihood that such a thing is bound to happen sooner or later. A cruise ship attack, it reasons, would have a far larger international impact than many any other types of attacks. (Click here for a PDF of its report; the cruise section starts on page 73).

Of course, an attack by ISIS is extremely unlikely to happen in the Caribbean or Alaskan cruise markets—they're just not based around there—and they're most likely to happen in the eastern Mediterranean, which is nearest its strongholds. The heat is definitely turning up in the waters around Turkey and Syria: Not many tourists realize that since 1971, Russia has maintained a naval facility in the Syrian port of Tartus, a few hours' sail from the island of Cypress, and this year, it began the process of expanding. This means Russian warships will soon have a heavier presence in the region, and given that Russia is involved in the Syrian struggles, it means more wartime activity will be happening on the waters of the eastern Mediterranean.

None of this is meant to discourage people from traveling. As I said, I was there myself just a few weeks ago and found the locals were in good spirits and happy to welcome me. There was no detectable tension in the air. But we must also be realistic about the ebb and flow of geopolitics—and we must recognize vulnerability where it exists.

Although Disney has not publically admitted to pulling out of the region because of the fear of terrorism, it's a safe assumption. The Disney brand is a plump, consumerist target for terrorists eager to make a splash on the world stage—the company's land-based theme parks have also recently tightened security. I applaud Disney Cruise Line's early wisdom. When it pulled out of Tunisia a few years ago, it was a crushing blow for the honest and welcoming Tunisians that were excited to be a part of a prime tourist destination, and it was a blow for the thousands of Americans who would have experienced firsthand that mainstream Muslim culture is warm and decent.

But pulling out was a good early call by Disney. In March of this year, cruise tourists were slaughted on a shore excursion to Tunis' Bardo Museum. Only then did most of the other cruise lines follow suit and pull out of Tunisia. Then, last summer, it happened again: Thirty-eight tourists were killed at a beach resort there.

I deeply regret the cost of pulling out of any destination. In this case, it means that thousands of Americans will not be transformed by being exposed to the wonderful Turkish, Greek, and Maltese people who are already suffering from economic and tourism downturns. This isn't their fault, their countries are truly worthy of experiencing and exploring, and for their sake I hope this anxious period will soon pass.

Until then, we must send our cruise ships to parts of the world where we can feel more assured of their safety—and this is entirely down to the fact that we cannot reasonably protect them. Until we know how to protect cruise ships from catastrophic incidents (and to be blunt, I'm not sure we ever can), then we must to do all we can to ensure they sail in safer waters.