While those who head to sea are no longer afflicted by rickets (too many citrus fruits on the buffet for that), they do sometimes have to handle noroviruses, seasickness, and that most invidious of miseries: the feeling of being “nickled and dimed” to death.

But that may be about to change, thanks to a new program being instituted by Celebrity Cruises. Is this good news for travelers? You judge.

Just in the last two weeks, Celebrity has announced that, with the exception of those cabins without windows (known as “inside cabins”, they account for about 10% of the stock on most contemporary cruise ships), staterooms will now carry a “bundled” price. Folded into the base price—which is undisclosed under the new system—will be amenities: pre-paid tips, unlimited Wi-Fi, unlimited drinks or $150-per-person in shipboard credits. Called the “Go big! Go better! Go best” plan, guests pick one of these items at the most basic level, two at the second level and all four if they pay the most, with the unlimited drinks package transformed into a “premium” package (translation: top shelf booze). To complicate matters, in the case of some suite purchases, guests get all these extras automatically. This plan is in place for all new bookings for fall cruises through sailings in April of 2017.

Travel agent Pat Webb, owner of GalaxSea Cruises and Tours, thinks the new system will delight passengers, and was a necessary move. “The cruise industry was losing a lot of passengers to all-inclusive resorts,” says Webb. “People like knowing what their vacation will cost in advance, there’s a comfort to that.” He also notes that the move will be good for travel agents, who will now get a commission on more items (such as the drinks package). And, since the system isn’t straightforward, cruisers will need advice on which plan will be most cost-effective for them, something they’ll be able to get from a seasoned agent. “With good advice, I think this system will really work well for the vacationer,” says Webb.

Not so fast there, says Sherry Laskin Kennedy the founder of the CruiseMaven.com, a cruise and destination advice site. “You’re going to have to be pretty savvy to make sure that the Go Big, Go Better, Go Best is really an advantage,” says Kennedy. “In cases where cruise lines other than Celebrity are doing the same itinerary, it’s going to be difficult for consumers to tell which cruise is offering the best value now.”  Except in the case of inside cabins, shopping online will no longer allow the would-be cruiser to make an “apples to apples comparison”.

The bundling also begs the question as to whether passengers are getting enough value on the amenities. Though it's hard to tease out how much is covered by the base fare, and how much is being paid for the amenity, on the lowest tier of bundled fares, those who decide to go for two amenities generally pay about $105 per couple to upgrade. (That number will vary by season and sailing). If a couple decides that they want to add in an unlimited drinks package, that's about $52.50 worth of liquor a day. Considering a beer on a Celebrity ship is about $6, that means someone would have to drink more than 8 beers a day to make the program pay off—binge drinking under any other circumstance. However, if the couple decided to go for the $150 per person in shipboard credit, or the unlimited Wi–Fi (an insanely costly service at sea), they would be saving money.

Sadly, couples won't be able to "game" the system, with one of them getting the drinks package and the other getting Wi–Fi, and then sharing. Under the program, both members of the couple have to choose the same perk. 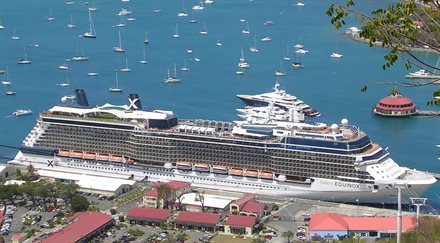 Of course, such pricey players as Regent Seven Seas and Oceania cruises have long offered perks that the mass volume lines don't to their guests. But will the other biggies (Carnival, Holland America and the others) follow Celebrity’s lead?  Royal Caribbean has announced that it will be doing so…on one boat. Instead of selling its older ship the Majesty of the Seas, as previously announced, it will be retro-fitting her with popular restaurants and new waterslides…and giving free Wi-Fi to passengers on its 3- and 4-day cruises once the boat gets out of dry-dock.  In addition, Princess Cruise Lines has floated a few deals, for its previous customers only, that included Wi-Fi and other amenities. However these offers were always for only a few sailings within a limited purchase window.

“We’ll have to see how it goes with Celebrity,” says Webb. “But usually if something works for one line, the others end up adopting it.”