As Disney World Tickets Break $100, There Are Signs Disney Vacations Are Now Only for the Rich

Disney raises its prices every year in advance of the big school holidays, and this year, its price hike has broken a barrier that seems impossible. As of today, a single day at the Magic Kingdom in Orlando now costs $105 plus tax. That's a 6% hike over the previous rate.

The per-day price goes down if you buy more than one day of tickets, but of course, the total amount paid goes higher, too. $105 is now the minimum you must pay to see the Magic Kingdom, the world's most popular theme park.

The other three Disney theme parks in Florida are also nudging the $100 barrier: Epcot, Hollywood Studios, and Animal Kingdom are all now $97 plus tax—and the tax sends those prices over $100, too.

What effect is this having on tourism? There was this telling fact in the coverage of the price change from the Orlando Sentinel:

"According to Visit Orlando, the average household income of overnight leisure visitors here was $95,720 in 2013 compared with $88,349 in 2012."
That's an increase of more than $7,000 in one year in annual the income of the families that come to Orlando. That's a statistic that is surely cause for rejoicing among the hoteliers and vendors there, but make no mistake: It's also a dark sign that those with lower incomes are being excluded from the most popular theme park vacation choice in the world—and they're being shut out with swift speed.
What's happening in Orlando is happening in American society in general: The tourism industry is cashing in on the divide between rich and poor by increasingly catering to the wealthy and leaving those without deep resources out of the fun. Ten years ago, a one-day Disney ticket cost $59.75, which means the price has nearly doubled since then.
Today, the resort is adding more rooms costing over $1,000 a night, including the opening of the Four Seasons resort within view of the Magic Kingdom fireworks, and more luxury add-on experiences such as VIP dessert parties. The Disney increasingly penalizes guests who come for only one day or who avoid their high-priced hotels by offering them substandard or less convenient experiences, and it exerts intense pressure on visitors to extend their stays, thereby extending their expenses into the thousands of dollars. Parking a car alone costs $17 per day at a theme park.
It's not only Disney that has raised its prices. Universal Orlando also jacks them higher like clockwork: a one-day pass to its two parks is now $136 plus tax for adults and $130 for kids, but will almost certainly rise again in the coming days to keep pace with Disney.
Adult, one-park tickets for Disneyland in California also rose. Now they are $99—next year, that'll break the $100 barrier—and $155 if you want to see both parks in one day. Tickets there have shot up 140% since 2000.
And yet despite these hikes, the crowds are still there. Disney Parks CEO Jay Rasulo told investors recently that first-quarter attendance was up 7% over last year. That's the largest first-quarter increase for the company. If Disney were to lower its prices—which will never happen; the company is publicly traded—the parks would become so swarmed with bodies that they would become even more impassable than they can be now.
And here lies an unfortunate conclusion about Disney's position: It's based not only on a hunger for dollars, but also on a practical reality that the only way to keep crowds at these American institutions under control will be to raise prices even higher. For Disney, a victim of its own success, the only way to keep the parks pleasant is to continually thin the herds with aspirational pricing.
Have we reached the point where a Disney vacation, which for 60 years has been a mainstay holiday choice for American families of all classes, is being steered by the publicly traded Disney company to be something that instead is geared toward attracting only those with high incomes? 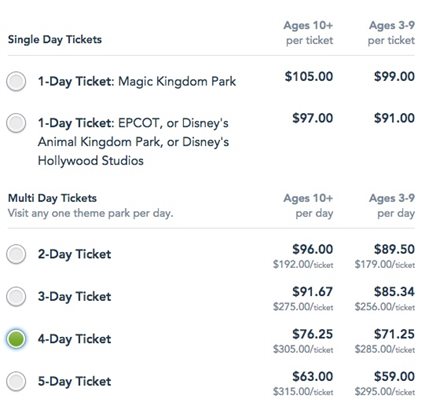 Our guide to Walt Disney World and Orlando won Guide Book of the Year this year from Society of American Travel Writers. You can buy it here.