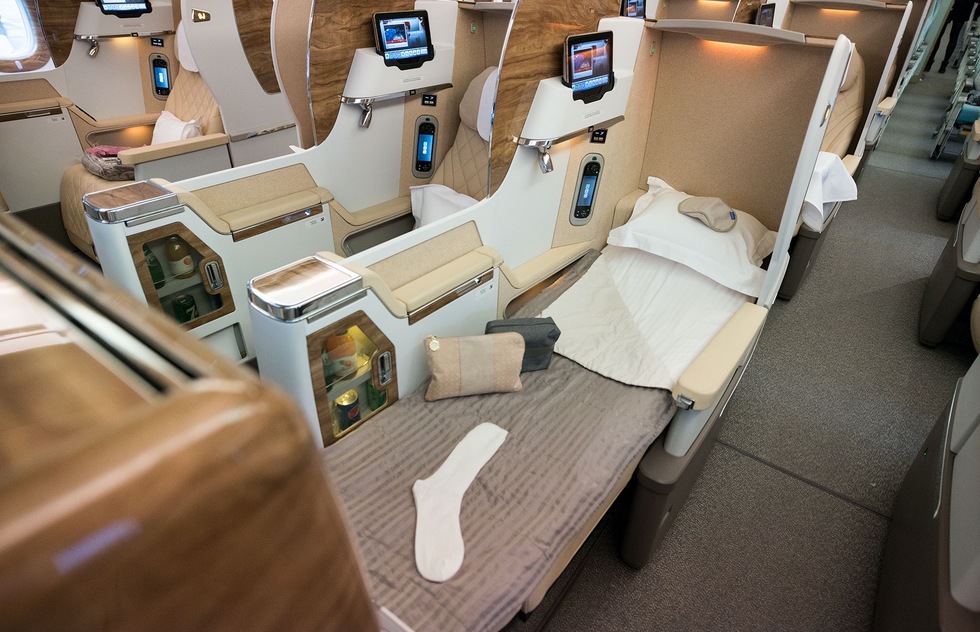 Last summer, with no fanfare whatsoever, Emirates changed the rules of business travel.

It took what was a signature product—its well-rated business class service—and decoupled it from some of its perks, in effect creating a version of Basic Economy for the “lie flat” jet set.

When online bookers click on Emirates' “Saver” or “Flex” business class fares, they can nab a roomy, horizontal-at-will seat at the front of the plane (like the ones on the airline's Boeing 777-300ER, pictured), but without many of the perks that usually are de rigueur in business class.

The lost privileges vary by category and by flight, but they often include the ability to pick a seat; access to the lounge (unless a passenger is already receiving that as part of elite status); and chauffeur service to the airport.

These special fares also earn fewer loyalty miles, impose a hefty change fee, can’t be cancelled for a refund, and have limitations on upgrades—again, unlike normal business class tickets on this carrier. Sometimes upgrades to first class are banned altogether, and when they aren't, the price of loyalty miles for the upgrade is far higher than usual.

The new, lowest business fare level doesn’t seem to be available on every flight. But on flights between Newark and Dubai, the lowest-priced business class seat was about $1,500 cheaper than the highest one—a considerable savings. I also found a few levels of savings on itineraries between Los Angeles and Cairo, Dallas, and Mumbai, and Boston and Dubai.

"These restricted business fares have grown quickly and are now filed in many markets from the U.S. beyond the airline's Dubai hub," notes Brett Snyder of the flight planning website CrankyConcierge.com. "I would expect we'll see this continue to grow."

So is this a good development overall for travelers?

It’s certainly a boon to tall passengers tortured by economy seats, as well as those who want to sleep flat on long overnight flights without having to mortgage the farm to do so.

That being said, we’ve found that decoupled airfares of this sort can be overly confusing, so do read all the fine print and restrictions before booking one.

"Over time, I imagine other airlines will at least test this, since it would help them to continue to raise revenue," says Snyder.

I agree. Airlines are lemmings, so it should only be a matter of time before another carrier makes a big deal out of decoupling its business class offerings. Stay tuned!
Air Travel
Money and Fees
News