Some would say that’s the key to a good life, but the editors of National Geographic have a simpler formula: They think choosing the best season to travel will enhance your vacation immensely.

Towards that end, they’ve issued a handsome coffee table book called Four Seasons of Travel: 400 Of The World’s Best Destinations in Winter, Spring, Summer and Fall. Along with exquisite photos, it contains short essays on 400 destinations across the globe, detailing why one should visit, and as importantly, when one should.

Some are well-known—Salzburg and Sienna for summer, New York City when the holiday lights are lit—but others will pique your imagination, like the prospect of heading to Wadden Sea National Park in Denmark in spring. It’s then that the “black sun” occurs when thousands upon thousands of starlings “erupt from their feeding grounds and etch amazing patterns against the darkening skies.” Adding to the “show” are the hundreds of hawks, eagles and other birds of prey who hunt the starlings, causing their “aerial ballet” to take on a life-and-death aspect that’s apparently mesmerizing to behold.

Along with the marquee events that make up the reason for visiting, the editors of the book have smartly included a small sketch of what else there is to see and do in the area. (In Denmark, readers are advised to visit a noted Romanesque church before heading out to the UNESCO World Heritage site marshlands.) At the bottom of each page, again a wise move, are websites that direct travelers to the vital information they’ll need in order to craft a visit.

So where else do the well-traveled editors of National Geographic think you should go? Here were a couple of their suggestions that startled me:

*Vermont: That may not sound like an odd suggestion, but the Nat Geo folks suggest you skip the winter ski season, avoid the leaf-peeping opportunities of fall and the splendid hikes of summer and instead head to this US State in spring. Why? To experience “syrup season” when the trees are being tapped, and festivals are held to celebrate the state’s legendary maple syrup (Vermont produces more of the sweet stuff than any other state in the USA).

*Puno, Peru:  With the seasons reversed, this is a place to visit during our wintertime, their harvest period. It's then that 50,000 folkloric dancers and some 15,000 musicians compete at a fortnight-long festival, performing the region's seven most important traditional dances (including the delightfully titled waka waka, a bull-fighting dance).

*Kasanka National Park, Zambia: The world’s largest mammal migration doesn’t involve creatures with hooves. It’s a bat migration and at the Zambian National Park, between October and December, some 8 to 10 million fruit bats flap across the savannah at dusk and dawn. In Four Seasons, it's described as a “primal scene set against a blood-red sky… like 700 elephants flying overhead.”

*Inuvik, Northwest Territories, Canada: Apparently this tiny town, just two degrees above the Arctic Circle, becomes a mecca for artists each July. Its then that the Great Northern Arts Festival takes place, a powerhouse event that draws hundreds of visual artists and performers and thousands of visitors.

The book's entries are written by such notable travel writers as Andrew Evans (Digital Nomad for National Geographic Traveler) and Larry Bleiburg (former Travel Editor for the Dallas Morning News), along with a few celebrities such as Alec Baldwin, skateboarder Tony Hawk, and comedienne Sandra Bernhard. I particularly like the list of "bests" scattered through the book, for those who may want to attend a fest, but don’t know which one to pick (who knew that Cabo Roig, Spain and Auckland, New Zealand had rollicking St. Patrick’s Day festivities?).

All in all, it’s a delightful book to dream on, filled with inspirational photos and just-long-enough text to tickle the old wanderlust bone. If you have an avid traveler in your family, this could well be the perfect holiday gift for them. 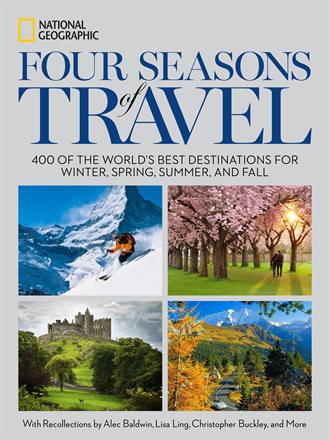