The dish felt like a dare. “Fried pigs blood with [unpronounceable Scandinavian] berry,” the waiter said placing a small slab of wood with a fried ball in front of me. And then he gave me a second look and a grin, as if to say, “So, are you really going to eat that?”

Welcome to the extreme foodie Brooklyn restaurant scene, one that many diners think is currently eclipsing Manhattan’s. In just the last five years, more than a dozen truly gourmet eateries have opened, enticing diners to make the pilgrimage, not just from the other boroughs of New York City, but from all over the world, to try these critically acclaimed new restaurants.

And the purveyor of pig’s blood? That would be Aska (90 Wythe Ave (at N. 11th St), 718/388-2969; www.askanyc.com;) the city’s first outpost of the “New Nordic” movement of cooking. Developed in Scandinavia, it’s the highly inventive, deeply rustic, style of cooking that has given Stockholm more Michelin-starred restaurants than any other city in the world.  Also on Aska’s $65 tasting menu (the only way to eat there), was a dehydrated scallop “chip” with dill puree, pork neck with birch tree oil; crispy pike skin with crème fraiche and garlic powder; and a number of other delicacies. How did it all taste. Not to wax too poetic, but the flavors were like the sea, and the creamiest of creams, the porkiest of porks. Exquisite, surprising food, served by an eager young staff, in an eccentric loft space (upstairs is a graphics studio). 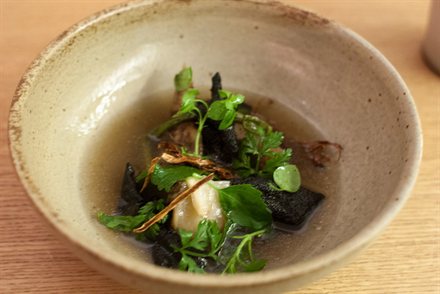 (A plate of lichen, salsify and autumn leaves at Aska)

A far more upscale, but just as, well, weird, culinary experience awaits those who get one of the few coveted reservations at the Chefs Table at Brooklyn Fare (200 Schemerhorn St, 718/243-0050; www.brooklynfare.com/pages/chefstable; call one month to the day before you want to dine). Seating is in a gleaming, steel kitchen at a D-shaped table with the customers on the curve, and the intensely focused chef Cesar Ramirez and his accolytes, er sous chefs, moving like precisely choreographed cooking ninjas around the stove (really, it was impressive; in the course of the 2.5 hour meal, not a plate clinked, a pot rattled or, it seemed, a chef spoke a word). I can’t tell you what I ate because it’s forbidden to photograph the food, or even take notes here (I got caught). I remember, in the course of the, what 14 course extravaganza, hearing the names of fish I had never encountered before (“blue nosed”-this, and “shark grin” that). We were also plied with caviar, gold leaf, foie gras and many other pricey delicacies, which, I suppose justified the $225 tasting menu cost (that price includes tip, but not alcohol). All in all, it was a spectacular experience.

For a less pricey, but still as fulfilling a meal, my final recommendation is Talde (369 Seventh Ave. at 11th St. [tel] 347/916-0031. www.taldebrooklyn.com). On first glance, it looks like so many other Brooklyn restaurants: pressed tin ceiling, large marble bar at the front, decorative carved wooden trim everywhere. But when you look a bit closer you realize that Buddha is carved into the wood, along with other Asian symbols. And the menu contains all sorts of unlikely marriages, like pretzels crusted pork dumplings (spectacular!) and yuzu guacamole (which turns out to be avocado and yuzu mashed together and slathered, finger-food style, over cakes of crispy rice). Other stars of the menu include a creamy tom kha soup with lobster, a pad thai with bacon and oysters and the hola hola dessert—shaved ice with a changing mix of toppings (when we were there it was fresh berries, Captain Crunch and balls of tapioca, which sounds odd but tasted fabulous). My one complaint: the waiters push customers to order more than they need (portions are larger than they say).

Want a great meal in New York City? Buy a metrocard and head to Brooklyn!