By Advertising That They Are "American Owned", A Number of U.S. Motels Are Engaging in Utterly Improper Racism

You don't have to drive long on U.S. highways until you see one: a motel sign loudly boasting the premises are "American-owned."

And you don't have to stay in many motels to know that in the past 25 years, budget accommodations have become a major growth sector for immigrants from South Asia.

A large proportion of America's budget hotels are now run by people born in and around India, who have come to manage low-budget hospitality the way the Irish once dominated domestic work, Greeks ran budget diners, Jews made garments, and Koreans ran corner groceries.

The economic downtown slammed the United States' roadside hotel industry, and as properties went on sale at bottomed-out prices, they gave Indian families a rung on the ladder to operate businesses of their own. Hotels furnish places for a proprietor's family to live and they also them to assimilate into their new American communities.

As South Asians opened hotels, they found that local insurance companies and banks sometimes refused to risk serving the newcomers, so they borrowed money amongst themselves and formed a supportive network of people building budget travel businesses together.

There's one thing that American history proves: Anyone can start from the bottom and, through long hours of hard work and dedication, move up the ladder. Indian families are taking distressed properties no one else wanted and rather than let them sit derelict, they turned them profitable again. This isn't just good for local industry. It's the American Dream.

What started as a positive has become, for some, a negative. The American community of Indian hotel owners became derisively known as the Patels, a common Indian surname.

A casual perusal of reviews on TripAdvisor.com and comments on articles about budget motels reveal an undercurrent of racism regarding motel owners of South Asian descent, proving there are plenty of people who conflate the standard perils of cheap travel with the nationality of the proprietor. 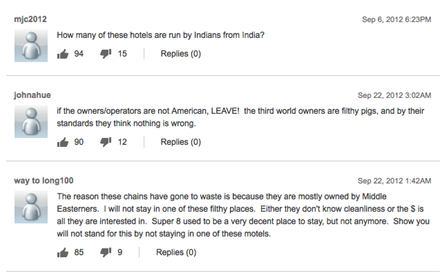 Or this one, from a hotel in Massachusetts, from TripAdvisor.com:

Many hotel owners are posting signs out front that proclaim they are "American-owned." In the context of comments , those signs seem like a socially acceptable code for "white-owned."

Many of us have stumbled upon plenty of fleabags in the past, and we shrugged it off as part of the peril of budget digs. But in recent years, some Americans have become quick to blame race for what we used to understand as bad business.

Make no mistake: When you're dealing with hotels on the lower end of the price scale, cleanliness and service are a primary concern no matter who is in charge. You can be a jerk or a slob no matter what color you are, and scuzzy motels are not an invention of any particular culture.

We know. Appraising the value of affordable hotels is one of the cornerstones of Frommer's. We can tell you from 58 years of budget travel experience that dirty rooms and poor service are not particular to any skin tone or germane to any nationality.

Dumps are run by people of every color and creed. That's why we're here to warn you about them.

Realistically speaking, there are serious challenges to turning a property with a marginal revenue stream into a business that both pleases customers and maximizes profits, and at the low end of the price spectrum, it is always difficult to find the right balance, no matter who is running the hotel.

There is also a learning curve for any new hotelier. But it's intellectually lazy to blame cultural differences for problems that are known to plague the budget travel industry as a whole, especially since there are plenty of bad hotels run by Western Europeans and plenty of exceptional hotels run by South Asians.

If the standards of any property don't measure up for you, the rules are the same as they ever were: Be a courteous and responsible consumer. Politely communicate your expectations in the hopes that the manager will satisfy them.

And if that doesn't work, find a hotel that does.

May I suggest the legendary Taj Mahal Palace in Mumbai? It consistently ranks five stars and is always ranked among the world's finest hotels — and it is run, incidentally, entirely by Indians.