Go to Nashville, and you’re going to come home a fan of country music.

I know—it happened to me. And I’m from New York City, for Pete’s sake.

That’s not to say that all Nashville has are shrines to crooners in cowboy boots. Its robust music scene embraces many genres, from classical to blues (the latter scene, in particular, is hot, hot, hot). Multiple universities keep the population young, so nightlife of all sorts abounds. But so do compelling museums and monuments to the past—stately plantations, the only full-size replica of the Parthenon on the planet, a Civil War battlefield and more. The food is fabulous though often deep-fried (dieters beware) and if you’re a shopper you’ll be well pleased, and possibly distressed, by all the temptations here.

But the experiences that make Nashville a destination, rather than just a city, come with a twang. Like the Country Music Hall of Fame, a complex three times the size of most municipal art museums that takes an alternately scholarly and kitschy approach to its subject that works surprisingly well. On the side of erudition are videos, wall panels and displayed artifacts tracing the genre’s roots back to both the folk traditions of England and Scotland; and the music brought over by slaves from Africa. And for pop-culture thrills, it’s hard to beat taking selfies in front of Elvis Presley’s “solid gold Cadillac” (its 27 layers of paint were mixed with crushed diamonds) or watching a 1970’s Loretta Lynn pitching Crisco on television ads and the Dukes of Hazzard crashing their cars to a country soundtrack.

The museum’s highlight, however, isn’t actually in the building. Those in the know, pony up a bit extra to visit what may well be the most famous recording studio on the planet, Studio B. Visitors are taken in a small bus to the studio, where they see the outside wall that Dolly Parton actually rammed her car into (she was so excited to record there, she hit the gas rather than the brakes when driving up); and the studio where some 1,000 hits were recorded (by everyone who was everyone in country, plus a huge number of rock and gospel stars). Interestingly, this was the first place an “isolation booth” was used to better define the sound of one track (the engineer deployed a coat rack to isolate Roy Orbison's distinctive voice) and where studio musicians first created charts to replace more traditional sheet music. And what could be better than learning that Elvis recorded “Love Me Tender” at 4:30 in the morning, and insisted that all the lights be killed while he crooned (and yes, the tour guide will turn off all the lights while you listen to the song).

Nearby the Hall of Fame is a shrine to the “Man in Black”, the Johnny Cash Museum which mixes the tale of this genre-spanning, incredibly successful musician with a history of Sun Records (his first label), stations where fans can “remix” the tracks of his hits, and listening stations where you can hear everyone from Miley Cyrus and Pearl Jam to Leonard Nimoy covering the great man’s tunes. (Dr. Spock had no business cutting a record, in case you were wondering.) 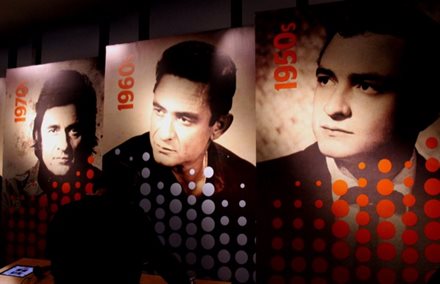 A wall display at the Johnny Cash Museum


Nashville’s pinnacle experience is attending a performance of the Grand Ole Opry, either at the smaller Ryman Auditorium or at the massive Opryland. As it has been for decades, the performance is broadcast over radio, so it includes hosts cracking corny jokes, an announcer reading hokey commercials and a dazzling array of talented musicians. When we last went, the headliners were the Gatlin Brothers and Loretta Lynn herself (sounding terrific by the way), but the most exciting performances were those by the young folks who you just knew will be huge names in coming years, like 23-year-old Parker Millsap, who blew the top of the joint with his rootsy howl and harmonica playing. And heck, who doesn’t love seeing rhinestone adorned square dancers perform?