Days 4 & 5 In The Australian Outback: Adventures in Alice Springs 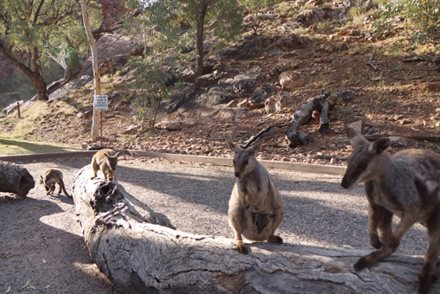 (Wallabies gather in a parking lot in Alice Springs; yes, that is a baby wallaby peeking out of the pouch!)

Had I visited the Northern Territory a decade-or-so ago, I likely would have come to Alice Springs before Uluru-Kata Tjuta National Park. Back then, very few flights came into the Ayers Rock Airport, and so most visitors spent two days in Alice before driving the 3 hours to "The Rock". Expanded air coverage to Uluru, however, has meant that many visitors are skipping Alice Springs altogether, a real shame as this town is as fascinating a destination, for the simple reason that it is the "sun" around which a number of isolated communities orbit.

A bit of history before I get back to that point. Alice Springs was founded in 1872 because it was halfway between Adelaide and Sydney, and thus a perfect spot for a telegraph station. It became the middle point of the longest overland telegraphic system the world has ever known (or so claim the people here). From Adelaide, under sea telegraph lines could bring messages to Indonesia and from there to England, meaning that a message that would have taken 9 months to arrive via boat, could now be sent in 12 hours. (It took 12 hours because a telegram had to be retranslated and re-sent every 300 km or so. Who knew?). (You learn all about this when you visit the "Telegraph Station", the area of town where the historic buildings from the early settler days have been preserved. It's also a favorite meeting place for kangaroos; we saw three hopping nearby when we were here).

Today, Alice Springs is an iconic Outback town, a place where the Australian version of cowboys come loping in from cattle stations, hundreds of kilometers away, to gather supplies and, perhaps, have a night on the town. It's also a center for the many aboriginal communities in the region and a place where people escaping "city life" feel at home. The downtown has a happy hippie vibe to it, as dozens of counter-culture types hang at the cafes, dangling babies and talking politics and music. At the town's cultural heart is the impressive Araluen Cultural Precinct, housing a fascinating aviation museum, a natural history museum, a sculpture garden and a state-of-the-art Araluen Arts Center. That final museum is currently hosting a spectacular exhibit of contemporary Aboriginal art, with pieces that take traditional dot painting into new realms: portraiture, abstracts and pieces that have more than a whiff of pop art about them. If you're in Alice Springs before mid-October, this is a must-see exhibit. 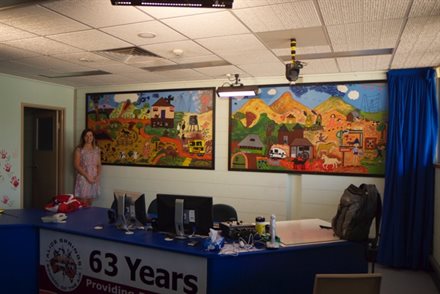 The town also plays a crucial role in supporting the surrounding communities; seeing how that plays out is an integral part of the visitor experience here. We didn't get to the Royal Doctors Flying Service Visitors Center (I've heard it's terrific though), but we did visit the inspiring School of the Air. Since 1951, children living on remote cattle ranches, Aboriginal communities and national parks have been educated by the "School of the Air". Paid for by the government (it's public school), it was originally children being taught via radio, but today teachers use the internet for their classrooms. They have several cameras on them and several computer monitors, including one for "gym class" (in an open area, the teacher jumps around or dances and the kids are supposed to follow her). The young woman in this picture is an alumnus of the school, standing in its main classroom (when she was 5 she helped paint the mural that's behind here). Her father was a park ranger, so she lived hundreds of kilometers away from the nearest town. Every several months, her mother would drive 3 hours, so she could have a weekend visit with the nearest child. At the age of 9, Hannah moved to the city where she was far ahead of her classmates, in terms of schoolwork. Apparently, that's quite common: the kids who are being schooled in this fashion are in the top 10% on achievement tests in the Northern Territory. 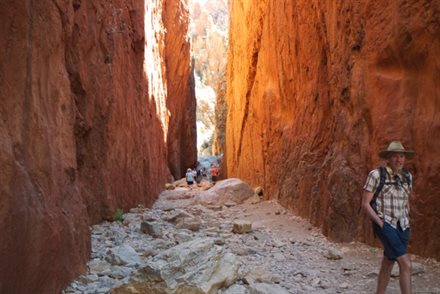 And finally, one of the top reasons to visit this city is that it's in easy driving distance of some spectacular nature areas. The photo above is Standley Chasm, which is about 25 kilometers outside the city. It's on land owned by an Aboriginal tribe, and is a place that's traditionally quite sacred to women.