Disney Raises Prices Past the $90 Mark, So Your Summer Vacation to the Mouse Will Cost More Cheddar

The Mouse has roared again. Each year it raises prices on us, and it did it again. A one-day, one-park ticket to its Magic Kingdom park now costs $6 more, or $95, and kids (which in Orlandoland are only children until age 9) cost $89. Interestingly, it is not hiking its other three Florida parks to the same level. They will be $90 adults/$84 kids.

Universal Orlando already hiked its rates this year, to $92 for adults. It was the first to break the $90 mark.

Let us not forget that price is only for a one-park-per-day permission. If you want to switch parks during the same, day, you have to pay a $34 surcharge. And don't forget that parking a car costs $14 a day at Disney World and $15 a day at Universal, and an average entree at a Disney sit-down restaurant costs around $25 a plate.

Let us also not forget that Disney won't make you pay that full $95 a day if you agree to buy many days' worth of tickets, but of course, if you do that, you'll be unlikely to spend as much time exploring Florida or the other parks.

Lastly, let us not forget that Disney Parks saw its revenue grow more than any other Disney division last year. It made profits of $1.9 billion, up 22 percent, largely because of hikes like these. Because while people may cut back on a lot of things during a recession, apparently a Disney vacation isn't one of them, so there's no need to make the prices hurt less.

Disney used to raise prices at the end of the summer season, when the kids went back to school. Now it raises them right before the crowds hit. 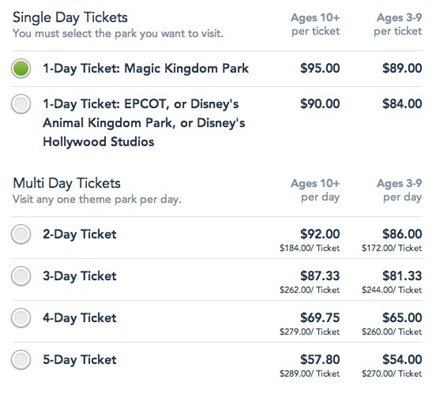