Disney World in Orlando Rolls Out Its Own User-Generated Reviews: A Good Idea?

Walt Disney World in Orlando has just turned on its new beta site, Reviews.DisneyWorld.Disney.Go.Com, where the vacation giant is soliciting user-generated reviews from customers.

Right now, most of the reviews are glowing, which in Disney's Cyber World means a rating of — you guessed it — five Mouse Heads. "For a moment, you feel as if you are in Italy," gushes one review of an Italian restaurant at Epcot's Italy pavilion. But now and then, there's a review that damns with faint praise. "I don't think that Stitch's Great Escape is the worst attraction in Walt Disney World. In fact, I sometimes find it tolerable."

The site also provides a mechanism for users to pose questions about the resort to other users of the site.

It's an unusual move for the company, which is famous for tightly controlling its image. Then again, it was also at the vanguard of aligning itself with social media movement. In 2010, I produced this video about a seminar it hosted at Epcot's American Adventure pavilions for the so-called Disney Social Media Moms.

Then again, it could also be argued that the risk is minimal. Many of the users of Disney's official site will be Disney fans to begin with, and prone to praise.

Until now, Disney reviews have come from third-party sites. The new site poses an intersting question: Would you trust user-generated Disney reviews posted on Disney's own site? There is no indication that the company plans to delete unflattering reviews unless they violate community standards for illegal or offensive posts. 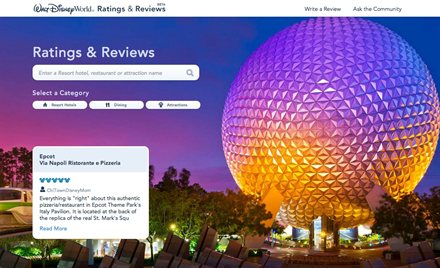