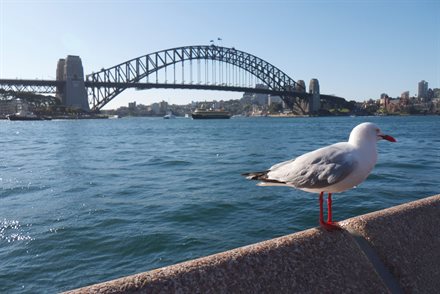 Some 16 years ago, a clever entrepreneur named Paul Cave came up with the idea of allowing tourists to scale the arch of Sydney’s iconic Harbour Bridge (largest single span steel bridge on the planet). The activity has been an initiation rite, of sorts, ever since. In the lobby is a gallery with “Who’s Who” of contemporary celebrities giving a thumbs up to the camera at the peak of the span (everyone from Al Gore to ice skaters Torvill and Dean to Robert De Niro). The bridge has also been the scene of nearly 5000 proposals, tens of thousands of birthday celebrations and way too many corporate bonding outings.

So it’s always been popular but it’s never been a cheap or a quick experience: a sunset climb is a whopping A$328 and requires a 3.5 hour time commitment. Sensing a problem—or perhaps an opportunity to make a few more shekels—the folks behind the experience opened up an “Express Climb” 5 years ago. But this quickie tour hasn’t received much coverage in the press, so that’s the one I decided to try.

Is it as good? Well, at just 2 hours (for my group at least; some take 2.5 hours), it allowed me to see and do more during my limited time in Sydney. And though it’s more of a horizontal and vertical experience than the original one over the curved top of the bridge’s arch, it shows visitors more sides to the bridge, which I think is a real plus.

On the Express Tour, travelers walk below the highway for the first third of the tour, before making their way up ladder-like stairs and between two lanes of speeding cars (on the way back, you walk between roaring trains). From there they ascend to the pinnacle of the arch for that “Look Ma, I’m a wild and crazy climber at the top of a bridge” photo opp (and no, you won’t get to take your own photos, your guide will and then try and sell ‘em to you).

Because you’re on the working “spine” of the bridge, you learn all about its quirks and challenges, as well as those of the people who settled around the bridge. When it was built in the 1920’s, residents had lived for generations on the very spots where the pilings were to be placed. The government kicked them out, offering no compensation whatsoever for loss of property. On the Express Tour you’ll see the modern equivalent: a line of modest homes just next to the bridge that had been set aside for public housing 99 years ago. One wears a sign with the words “No retreat!” because the government is once again trying to kick out those with water views, in this case to sell the land to the developer that comes in with the highest bid.

“Express climbers” also come upon the renovation work that’s going on, on the underside of the bridge (it’s shrouded in drapes to protect those around the bridge from the lead paint that was originally used). Up close and personal you see the 6 million, oversized rivets that were driven into the bridge to keep it intact. (A man named a “cook” would carry a huge stove across the ribs of the developing bridge to create the rivets. He would then toss them to a catcher who had climbed, without a net or harness, to more exposed areas of the bridge, holding a bucket full of sand. Divers have found 6000 rivets at the bottom of the channel below the bridge: not a bad ratio when you consider that many catches must have the workman’s life in danger.) You can also have an near in look at the Hyatt Regency’s swank private penthouse sundeck and pool. The  hotel rents that area the rich-and-famous for $16,000 per night with a two-night minimum. A warning to Beyonce and Bill Gates: it’s not the private place that’s advertised, as you’ll have several hundred people a day waving at you from the bottom of the bridge.

As with the normal tour, climbers are required to don goofy coveralls, a hold-over from the debut of the tour, when the government worried climbers would distract motorists. You'll also be clipped in to a safety wire the entire climb, so there's no way to fall (or jump) off. And no grabbing a shot of whiskey at the pub to steel yourself for the climb: participants are given a breathalyzer test at the start. Fail it and you forfeit both the money and the climb.

And that would be a real shame as seeing the Sydney Opera House and the harbor of Sydney from the tippy-top of the bridge remains Sydney’s epochal experience.

If You Go: The bridge climb, both types, costs between $218 and $318 per adult (less for children), depending on what time of day you leave. For complete info, go to www.bridgeclimb.com