Don't Buy the Hype! $10 Flights to Europe Will Never Be a Reality, And Here's Why 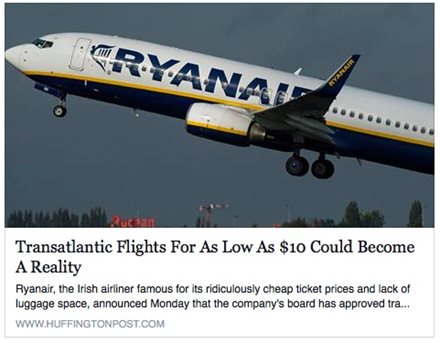 Anyone who has ever been on Facebook knows what click bait is. That's when some website—it used to be one you'd never heard of, but now everyone's doing it—writes a sensational headline that you just can't resist clicking.

This week, the hot-button click bait goes like this, from The Huffington Post (a common click-bait culprit): Transatlantic Flights for as Low as $10 Could Become a Reality.

Here's USA Today: $15 Europe Flights? Ryanair Board OKs Plan to Fly to USA. And from SmarterTravel: $15 Flights to Europe Announced by Ryanair.

There's just one catch: It's not true. You are never going to fly to Europe for $15.

SmarterTravel hints at just one of the reasons why when it reports, "For $30 round-trip, plus whatever add-on fees Ryanair can squeeze from passengers, travelers can expect barely tolerable legroom and bare-bones service."

Reason #1 You Will Never Fly to Europe for $15: Ryanair will charge tons of fees, most of them incredibly high, starting with the right to bring a bag with you. Ryanair is all about fees—for checking in at the airport, for getting a seat assignment, for printing a boarding card (that costs $15!), bag check fees as high as £70 ($103) each way for the first bag, and so on. No one in his right mind believes that $15 will be the final price. That doesn't seem to stop some travel publications from misleading readers into thinking it will.

Reason #2 You Will Never Fly to Europe for $15: Even if a passenger miraculously dodges every optional charge, there's no way that $15 price can hold. Government taxes and fees make up the lion's share of international airfares, and those cannot be waived. The $15 base fare is just that: a starting point upon which fees and taxes will be heaped. Pretty soon, your ticket costs about as much as the other carriers' do. Fees stack up depending on the two airports a flight visits; London's Heathrow levies a fee of £44.41 just to take off for the United States or Canada. The government also levies an Air Passenger Duty (APD) of £97 for any flight traveling more than 600 miles. So already you're paying another $209 even before paying a thing to Ryanair.

(Is $15 even that great of a price, even considering all the extra fees? Just today, I found round-trip flights from New York City to London for $74 each way on British Airways—except a round trip came with another $500 in mandatory "taxes, fees, and carrier charges." There's no avoiding that.)

That kind of bait-and-switch is something that is only left to travel journalists who write lead-in headlines the same way the airlines once advertised lead-in pricing. Ignore those sensational headlines and read deeper.

Reason #4 You Will Never Fly to Europe for $15: Ryanair itself is backing away from the annoucement. "In the light of recent press coverage, the board of Ryanair Holdings wishes to clarify that it has not considered or approved any transatlantic project and does not intend to do so," an airline representative said in a statement. (It may someday try to kick off a service using a separate holding company, but Ryanair itself says it's not in the game.)