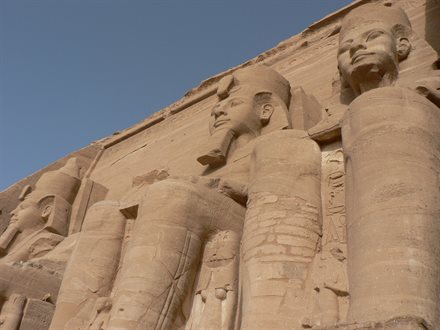 On a number of occasions this past year, I have been asked my opinion on whether it was now safe to visit Egypt.  And each time, I have answered:  no, based on numerous reports, it isn't.  And I added my heartfelt regret over that conclusion, because of my own several memorable and rewarding visits to Egypt in the past.

These cautions were immediately challenged by several users of this website.  Some of them said they had recently toured both Cairo and Upper Egypt (Aswan, Luxor, Abu Simbel) without incident; that they had benefited, in fact, from the virtual absence of other tourists at popular sites.  I responded that they were fortunate, that everything I had heard indicated that a protective police presence was now absent from almost every place to which tourists go in Egypt.

If any such conclusion needed confirmation, it was provided this past month by a highly-regarded columnist (Dennis Lennox) of The Morning Sun in Central Michigan, who recently returned from an independent tour of Egypt.  He has described so many incidents of a breakdown in tourist safety as to make my own warnings seem weak.

Simply to walk into the entrance of the Marriott Hotel at which he was staying in Cairo was to encounter several self-appointed guards who demanded a $10-to-$20 fee for the right to enter there, and who backed up their demand with threatening gestures.  When he reported these threats to the hotel manager, the latter simply shrugged.

On an escorted horseback ride into the desert near the Pyramids, which had been arranged by the hotel, his escort refused to allow him to return to the starting point before handing over all of the cash which he had in his wallet--about $40.

The crowning touch was experienced on his departure from Cairo Airport.  Immediately on entering the terminal, several porters seized his luggage and refused to permit him to check in until he had first paid them a "security fee" of $50.  "With no police in sight and the checkpoint guards clearly complacent, I had little choice but to fork over the money", the columnist wrote.

These incidents reveal an Egyptian population desperate for income.  Though Egyptians, in my experience, were always eager for tips ("baksheesh"), such requests were never threatening.  In fact, I was once more amused than angered when a guard at Cairo's Archaeological Museum tapped on a glass exhibition case, pointed inside, muttered "King Tut", and then extended his hand to me for a tip, saying "baksheesh".

But the extortion described by Dennis Lennox goes well beyond the request for tips.  They reveal a society that has almost entirely broken down in terms of their regard for law and order.  The guide who won't permit you to return to the starting point of your tour is a menace who threatens physical violence unless you hand him a substantial bribe.  So desperate for income, apparently, is the Egyptian population, especially those who once earned their living from tourism (which has now virtually disappeared), that the entire Egyptian touring experience is made dark and foreboding.

I assume that visits conducted in a group accompanied by tour leaders and guards, is currently safe in Egypt.  If you are on a cruise ship that makes a stop in Alexandria, from which busloads of tourists are taken to the Pyramids and Sphinx, then I assume your decision to join such a group is well founded.

But as for independent tourism in Egypt, on your own or with a single companion, I would not yet do it.  Unless respect for tourists' rights are restored in this magnificent country, which is normally an indispensable destination to see, I would not travel or tour  there independently.  And I say that as a person who lterally cherishes his memories of many unforgettable trips to Egypt in past years.