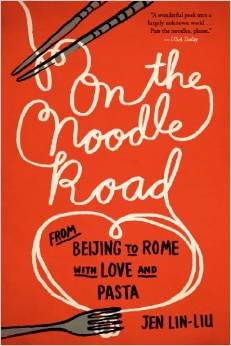 As a woman who was wooed and won by a man who laboured for three days preparing a lasagna — he made the pasta from scratch — I know, in a visceral way, that the connection between food and love is a potent one. Add well-seasoned prose and travel to the mix, and you have the makings for a compelling memoir. Or at least you do in the hands of Ann Mah and Jen Lin Liu, two accomplished authors who have recently written delicious books, Mah’s on her adventures in France, and Liu’s on the countries of the Silk Road.

The more ambitious of the two is On the Noodle Road: From Beijing to Rome with Love and Pasta by Liu, a book that deftly weaves together social commentary, history and both culinary and personal insights. After honeymooning in Italy and noting the similarities between that cuisine and Chinese cuisine, Liu became obsessed with the idea of trying to find out where, and how, the humble noodle was invented. That question, it turns out, can’t be definitively answered. But in tracing the route pasta possibly took, from China to Central Asia to Iran, Turkey and Italy, Liu has piquant and fascinating adventures, both on her own, and with her new husband, some of which tease out the strains and mysteries in their relationship.

Liu visits the home kitchens of a number of locals, where she learns not just recipes, but what it means to be a woman at home in Kyrgyzstan or Iran or Rome. Leaving the topic of food, the tale ranges from the not-so-quaint “kidnapping” of brides in Central Asia (sometimes a real kidnapping, at other times a ceremonial one prior to nuptials) to musings about hand gestures in Naples. The book ends, as it should, with a collection of recipes. This is handy, as the book will make you very, very hungry.

Recipes make their way into Ann Mah’s French adventures, which she titles Mastering the Art of French Eating (a tip of the toque to Julia Child). Mah originally came to Paris with her diplomat husband. When he’s abruptly relocated to Baghdad for a year, a posting that, because of the danger involved, he can’t share with her, Mah finds herself turning to food for company. As she’s a journalist, that means travelling to the regions where crepes, fondue and other French specialties originate. It’s a bit of a pat structure for the story, and Mah’s attempts at humour and emotional insight are more forced than Liu’s. But she manages to uncover intriguing tidbits of history, both cultural and culinary, that keep the narrative lively. And the recipes she inserts at the end of each chapter are terrific. Francophiles will enjoy how she unpacks the characters of France’s widely varied regions and Paris, itself.

If you have a gourmand in your family, grab a ribbon, wrap up one of the two books and put it under the tree a few months from now. You may just get a vacation in return, because if these two books don’t inspire travel, well, I don’t know what will.