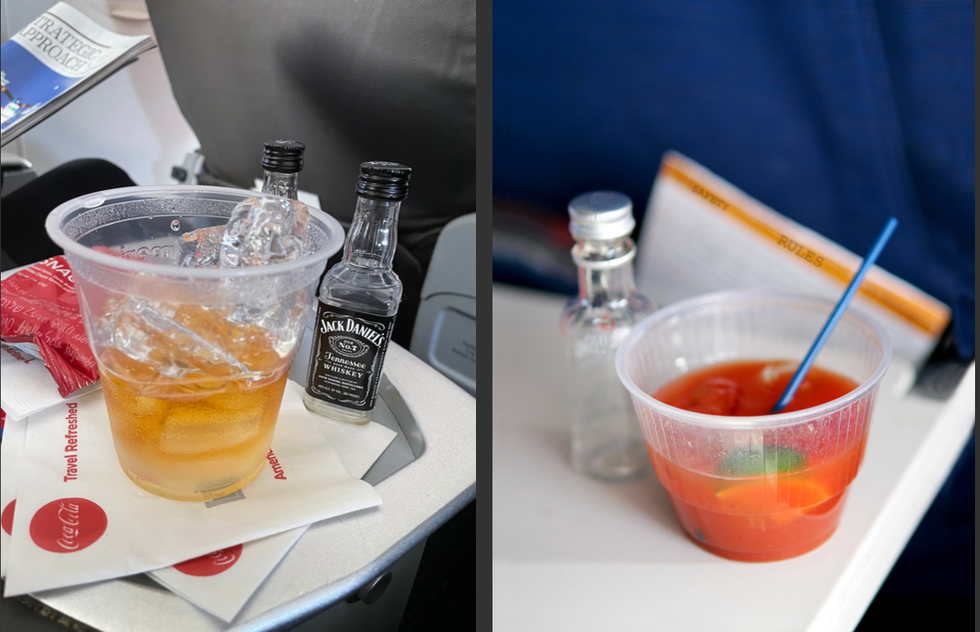 For Better or Worse, Booze Will Soon Flow Again on All Major U.S. Airlines

United Airlines has resumed selling hard liquor in the economy cabin on flights of at least 301 miles.

Like many other carriers, United went dry during the early weeks of the pandemic in order to minimize contact between flight attendants and passengers and to avoid giving drinkers a reason to lower their masks while on board.

But the airline now says contactless payment technology and the feedback of customers and flight crews have persuaded the company to restock beverage carts with mini bottles of booze for domestic flights. United has already been serving beer, wine, and hard seltzer in economy class since June.

With the change, United joins Delta Air Lines and Alaska Airlines in restoring in-flight alcoholic beverage service to close to what it was before Covid-19 came along. JetBlue, for its part, doesn't serve hard liquor yet but you can get beer and wine.

Of the six largest carriers, that leaves American Airlines and Southwest Airlines. Neither currently serves alcohol of any kind in the main cabin on domestic flights (curiously, American does make the stuff available to passengers in first class and business class—cabin categories Southwest doesn't have).

That will change in a couple months, though.

American has announced plans to lift its ban on January 18, 2022, the date when the U.S. mask mandate on public transportation is set to expire.

Southwest is expected to resume alcohol sales around the same time.

This is all happening, mind you, amid a surge in reports of unruly flyers—more than 5,100 so far this year, with the Federal Aviation Administration opening nearly 1,000 investigations into passenger behavior, compared to fewer than 150 investigations in 2019, according to the Wall Street Journal.

Adding alcohol to an already volatile situation rarely calms things down. That's why "bar fight" is a common term and "library brawl" isn't.

As a matter of fact, a rep with the Association of Flight Attendants union told Insider that alcohol has been a contributing factor in many of the violent incidents in the skies—one reason the union has proposed a ban on airports selling to-go alcohol, which some passengers sneak onto flights not serving cocktails (that's against the law, by the way).

What will happen when airlines add even more booze to the rage cocktail that flying has become during the pandemic? We'll soon find out.