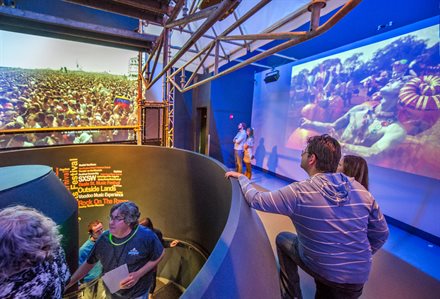 Thousands showed up when relics from King Tut’s tomb toured; and museum-goers slept overnight on the pavement to see the designs of Alexander McQueen when they were exhibited at New York City’s Metropolitan Museum in 2011. But a show doesn’t have to be a blockbuster to make it “trip worthy”. Here are my picks for four museum shows that are definitely worth planning a vacation around (in no particular order).

Re Collection (at the Museum of Arts and Design in New York City; www.madmuseum.org). In honor of its fifth anniversary at its Columbus Center building, the museum has staged a wonderfully eclectic survey of the best pieces it’s exhibited in the last five years—sculpture, textiles, jewelry, ceramics and furniture. Big names are represented (like Cindy Sherman and Judy Chicago), and even bigger ideas, with works that take traditional forms and subvert them in all sorts of delicious ways. There’s an elegant, French Empire couch that has somehow melted; a sculpture of what can only be described as a truck married to a gothic cathedral; and a tapestry that succinctly sums up the history of mankind. It’s not a large show (you can see it in an hour), but boy, does it pack a whallop.

Common Ground: The Music Festival Experience (at the Rock and Roll Hall of Fame in Cleveland, OH; www.rockhall.com). A good percentage of the tickets for Lollapalooza, Coachella and other famed fests are sold even before the full line-up of artists is announced. That’s because the social aspects of these gatherings are as important as the music (think: Woodstock). It's this sociological aspect of the festival experience that is at the core of the Rock and Roll Hall of Fame’s new exhibit. In fact, in a nod to the power of "the crowd", rock fans have, in a sense, curated this exhibit, deciding via social media which clips of famous festival performances should be shown. The exhibit will also feature live streamed music from some of this summer’s biggest fests, and artifacts and commentary from some of history’s most important rock festivals. It’ll be so good, you might almost be willing to forgive the Rock and Roll Hall of Fame for inducting Hall and Oates in 2013.

Masters of Olympus: Treasures from the Greco-Roman Collections of Berlin (at the Musee de la Civilisation; www.mcq.org) . Some 150-plus ancient masterworks—sculptures, amulets, jewelry and ceramics—are crossing the Atlantic for the what promises to be a festival of ancient masterpieces. The exhibit, which focuses on portraits of the ancient gods, includes such iconic objects as the Dresden Zeus (a model from the 2nd century A.D. based on a sculpture from around 440 B.C.) and the Ermanthyian Boar (which dates to the 6th century B.C.). The works are being borrowed from the Berlin Antiquity Museum.

Ruffneck Constructivists (Institute of Contemporary Art, University of Pennsylvania, Philadelphia; http://icaphila.org). Art world superstar Kara Walker curated this show (you likely know the silhouette cut-outs and sculptures she’s done on themes of African American history). Bringing together artists from across the globe, the exhibit mixes video art with compelling installations and sculptures, all of which explore the way inequality shapes our daily lives.

(Photo courtesy of the Rock and Roll Hall of Fame)