Haul My Stuff, Underwrite Your Vacation: A New App May Save Brawny Travelers Money

There are many ways would-be vacationers try to make their trips more affordable. Some start special bank accounts for holiday savings, others scour the internet for hotel discounts, still others rent spare rooms in local homes and plan picnics instead of restaurant meals.

And then there’s the gang that will haul stuff from your home to their vacation spot (or somewhere right near it) to defray their own vacation costs.

Yes, this is a thing now.

The relatively new app Roadie (it was launched in January of 2015) aims to take travelers where only FedEx (and UPS and the Post Office) have gone before. It does so by creating a virtual marketplace of people willing to haul and folks who need stuff taken.

“There’s likely someone in your general direction heading in the direction you need something taken. That’s efficiency!” says Marc Gorlin, founder and CEO of Roadie. “It’s almost like a natural resource, combining all those natural patterns. You have a more on-time, on demand system than UPS and FedEx combined. People can help each other, help themselves, and help the environment at the same time.”

Those who register as “drivers” (as opposed to “senders”) are shown available “gigs,” each with a fee attached. Driving a baby crib in a hatchback two states might net $185 for the driver, while transporting a rocking chair from the Northeastern U.S. all the way to the heartland could bring in as much as $650. Those who transport pets get even more. The app sets the rate, but senders can modify it if they need something moved quickly, or know that there will be tolls, parking fees, or other expenses along the way. Roadie keeps 20% of the fee, the driver gets the rest.

So far, 350,000 people have downloaded the app, with users in all of the 50 United States (Gorlin hopes to add Canada soon). 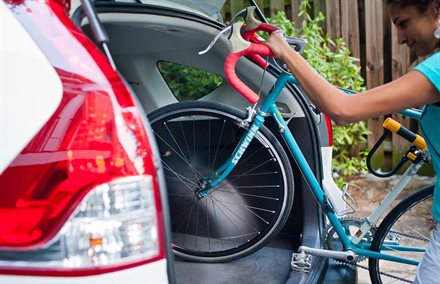 And according to Gorlin, many travelers are using the site as a way to partially underwrite their vacation expenses. There’s little risk involved for either driver or sender: UPS is a major investor in the company and it supplies automatic insurance of up to $500 on each delivery.

For the senders, the value of the new service can be even greater: Prices for hauling tend to be reasonable, there are no extra costs for packing materials (helpful with very fragile or awkwardly shaped items), and some find greater peace of mind with this arrangement.

“What you find when you look people in the eye is that they tend to take care of your stuff. That’s the sense of community that faceless corporations can’t match,” says Gorlin. But perhaps more importantly, there’s GPS. Users can take a picture of the item before loading it into the car or van, watch the driver’s movements through the entirety of the trip on the app, and then see a photo of the item when it arrives.

And not to be overlooked: There’s a sense of adventure to this that comes with the best vacations. Drivers are often amused by the people they meet, and by what they’re asked to carry—big buckets of mannequin legs was one recent load, as was an ex’s belongings unceremoniously dumped in trash bags. Pets are quite common as passengers/cargo—and who but the allergic among us wouldn’t welcome the company of a friendly dog on a road trip?

Will the app catch on? That’s an open question, but when I last opened Roadie I found some excellent money making opportunities….if I were going to vacation in Kansas. Which I’m not. This year, at least.