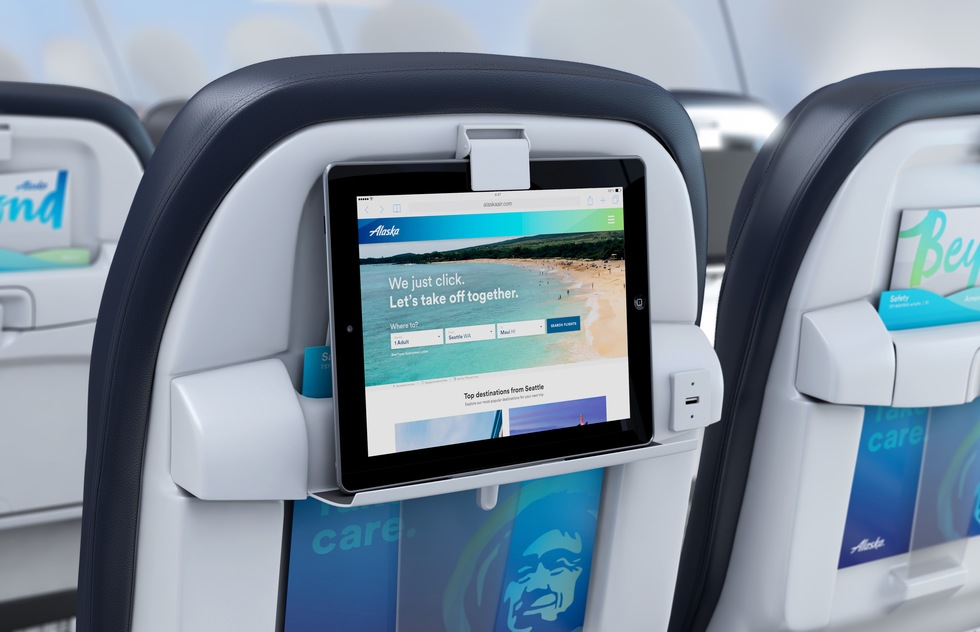 Hey, Airlines! Maybe We Don't Want to Watch TV on Our Phones

The airlines have stripped coach passengers of nearly every vestige of dignity—our legroom, our food, our free checked bags. But they're not done yet. Now they are taking away seatback entertainment systems.

Last year, Alaska Airlines took over Virgin America, one of the world's top-rated airlines for customer service. Virgin had a devoted following. Customers loved the carrier's sassy style and forward-thinking entertainment system: Every seat had a screen with live TV. If passengers wanted to order food and special cocktails, all they had to do was swipe a credit card in their screens and wait for refreshment to be delivered.

A week ago, Alaska unveiled what it had done to those comfortable Virgin jets: ripped out all the screens to match Alaska's old fleet. Now instead of watching movies and TV, customers face the back of a seat.

In the screens' place, passengers now get a clip to hold their own devices at eye level; a built-in USB outlet will keep the battery level full. Onboard Wi-Fi will stream movies and prerecorded shows, but live satellite TV will be a thing of the past. Web access will still cost extra, and on longer flights, Alaska will charge economy passengers $10 to borrow a tablet that comes preloaded with movies (but no live television).

Alaska, with typical public relations bombast, implied this retrograde development is what customers have been begging for. "After extensive feedback from our guests," the press release claims, "we've infused the Alaska Airlines cabin with key brand elements from Virgin America—the result is a premium experience at an affordable price."

Those "premium" features now include "ergonomically-friendly" (whatever that means—friendly to ergonomics?) tablet holders.

Eh, no. You kept mood lighting. You got rid of everything else.

Alaska isn't the only airline taking a quantum leap backward toward a 1980s look for cabins. United Airlines, American Airlines, and Hawaiian Airlines have all recently placed orders for planes without seatback monitors. The reversal is creating a schism in the industry—carriers such as Delta Air Lines and Emirates are pouring more resources into seatback screen features, not fewer, in an effort to attract passengers.

The other airlines can pretend that we're clamoring to lose seatback entertainment, but we're not. The truth is that, according to The Economist, each screen costs as much as $10,000 to install, requires a maintenance budget, and adds to the weight of the plane, which cuts into profits. That's why they're doing this.

Know what else cuts into profits? When we refuse to fly your airline because we don't want to be downgraded and bored. 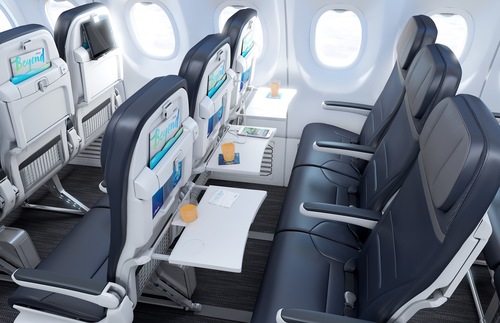 Soon we'll have to start choosing the airlines that are kind enough to supply screens. That's the precise feature that catapulted JetBlue into its successful trajectory when it debuted in the year 2000. Are we back to that now?

Tell that to people who really liked the innovation of being able to order and pay for food from their seats—that was a step forward.

Tell it to the families of five who can't afford to buy iPads for each of their kids. It's unfair to require your customers to make expensive device purchases to fully use your services.

Tell it to the passengers who now have to navigate three sets of cords as they get up to use the bathroom. You don't give us enough space as it is. With three passengers watching their own devices side-by-side, rows will be a rat's nest of tripwires.

Tell it to iPhone users, who, because of Apple's poor port design, can't plug in headphones and a charging cord at the same time. If they want to stream movies, they'll arrive at their destinations with low batteries.

Tell it to the many customers who enjoy having the seatback system's route map displayed while they do other things.

Tell it to me, who filled part of a six-hour flight on JetBlue last weekend by watching John Mulaney host Saturday Night Live as it happened, from 30,000 feet up. Tell it to my neighbor, who watched an NBA game. Receiving live television—live sports, live news—was one of the greatest features airlines added in recent years, and now you want to take it back?

Tell that to the woman a row ahead of me who couldn't even figure out how to plug in her headphones. Do you expect people of all ages and tech levels to be able to figure out your streaming system? Not all of us are 23 years old.

“More than 90 percent of our passengers already bring a device or screen with them when they fly,” American Airlines said to its staff in a statement when it announced plans to abandon screens.

That's neither here nor there. Yes, we all carry phones. But that doesn't mean we want to stare at them on long flights, too. We spend all day enslaved by our gadgets. We don't want to be forced to stay that way.

Airlines, you had a good thing going, and now you're backsliding and doing a halfhearted imitation of a city bus. Stop taking nice things away from us and pretending it's because we wanted less.