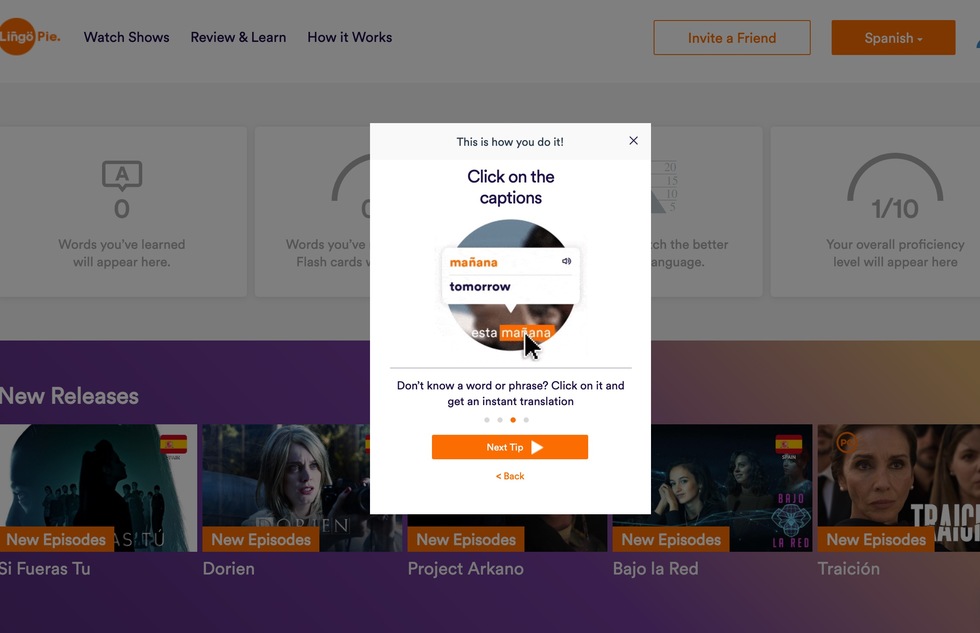 Hey, Lazybones! Now You Can Learn a New Language by Binge-Watching TV

Ask any immigrant: The best way to learn a language isn't in a class. It's through daily life. And a brand-new language-learning product is built on that principle.

It's an ideal self-improvement concept for the isolation of our moment: Sit on your couch binge-watching junk TV and come out brilliant.

Instead of forcing subscribers to study a creaky classroom curriculum involving conjugation and hypothetical requests to locate the bibliothèque, Lingopie lines up seasons upon seasons of TV shows that people actually watch in countries around the world.

After all, we talk more like our entertainment than our textbooks. Imagine how impressed they'll be in Mexico when you demonstrate how proficient you are in the smack talk of a telenovela or the street slang of a trashy gangster flick.

The site's design is seductive in its familiarity. You already know how to stream TV shows and movies, but Lingopie adds a technological layer that highlights the words so you never feel lost.

Using onscreen controls, subscribers can follow subtitles (in the original language as well as the English translation), loop back to hear the actors repeat lines of dialogue, and even slow down the playback rate (without deepening vocal tones or music) to decipher pronunciation.

Whenever an actor says words and phrases you don't understand, click on the subtitle—Lingopie stores the definitions on virtual flash cards for future study. The cards include little clips from the TV show so you can rewatch which character said what, and in which scene.

If you still don't quite get how to say something because the performer's diction was too colloquial, there's a button that lets you hear the word pronounced clearly by a separate translator. 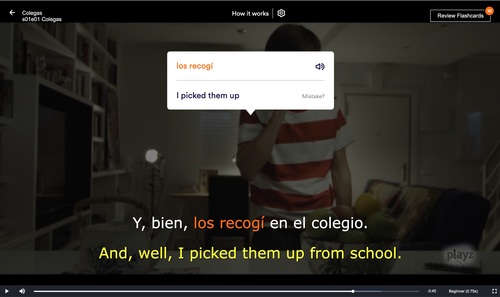 In addition to programming for grown-ups, there are kids' shows and cartoons in the mix, along with stuff specifically chosen because it's easy for beginners to follow.

But even the most rapid-tongued episodes can be slowed down to a comprehensible crawl using the speed picker located in the lower right-hand corner of the watch window.

This idea isn't entirely new. Rivals FluentU and Yabla do something similar with YouTube-sourced video clips and shows, but those services' interfaces are more involved, adding elements like deep definitions, games, and challenges to transcribe lines you've heard.

Such features are arguably better for focused study. Lingopie is more casual, like a Netflix clone with added language help. Which end of the educational video spectrum you select will depend on how long you think you'd pause for homework.

Linogpie, which is based in Tel Aviv, is just getting off the ground, so right now the only available languages are French and Spanish, but the service is expanding in a big way. This month, the platform inked a deal with RTVE, Spain's largest public broadcast network, to incorporate its programs.

That's one reason Lingopie's offerings in Spanish (which also hail from Colombia, Mexico, Argentina, and Venezuela, with little flag icons denoting origin) are richer than the French material. But there's still enough content in both languages to keep you busy—and options are only likely to improve as the service catches on and garners more subscribers.

The addition of other languages is in the works, too, and subscribers will have access to all that content as well—you're not restricted to one language.

Lingopie is priced as if it's just a normal streaming service: $9 month-to-month or $5 a month if you agree to a year.

Another reason the concept is an attractive one: With Lingopie, you get access to international shows that aren't always streamable from the English-heavy libraries of Netflix and Hulu.

That might be why, according to the site's owners, 87% of users who visit Lingopie for the first time sign up for a 7-day free trial and 70% of them end up becoming paid subscribers.

The company also claims that the average user learns 50–70 new words per episode (that'd be tough to measure, but I guess that's how many flash cards are usually saved) and watch five shows per week—which, let's be honest, is a lot more time than you'd probably spend on a traditional language program based on vocab lists and quizzes.

Subscribers must have an internet connection that's solid enough for video, and because of the interactive component, programs should be streamed to computers or devices instead of TV sets. For most of us, though, those aren't deal-breakers.

Is Lingopie perfect? Not yet. You will want to get ahold of some external reference material to pin down rules relating to, say, verb tenses and word gender.

Like a new immigrant, you're being tossed in the deep end of language usage here, so even though you're binge-watching TV, you can't check your brain at the login screen. You simply can't soak up the idiosyncrasies of a living language by listening alone—unless, of course, you're a newborn.

Figures of speech are especially tricky. The sense meaning of cambia de camello might be change your mind, but the literal translation is switch camel. When Lingopie showed me that phrase in La Gran Vida, it was up to me to figure out that it's just an expression. This is what ESL speakers have to do every day, though, so you can't call it a fault of the program—learning idioms is part of the process, and acquiring language is no passive pastime.

Now and then, too, Lingopie's dialogue track in some shows might drop out for a few seconds, although even when that happened to me, the subtitle function never failed, so the glitch didn't slow me down.

You'll also want to be alert to regional differences. There's no tutor to explain variations in accent and pronunciation among Castilian Spanish and Latin American Spanish, for example, so if you're not alert, you could emerge from your casual coursework with a Frankenstein's monster of dialects.

But those are quibbles that can be fixed as feedback comes in. Lingopie's core idea is solid because it suits our lifestyles, and the execution is ridiculously easy to grasp and use.

In fact, because it takes care of the hardest part of the education process—retaining my interest—I'd go so far as to say this is the most appealing language-learning tool I've ever used.

But then, I'm gaining new swear words without even leaving my sofa, so of course I'm delighted.