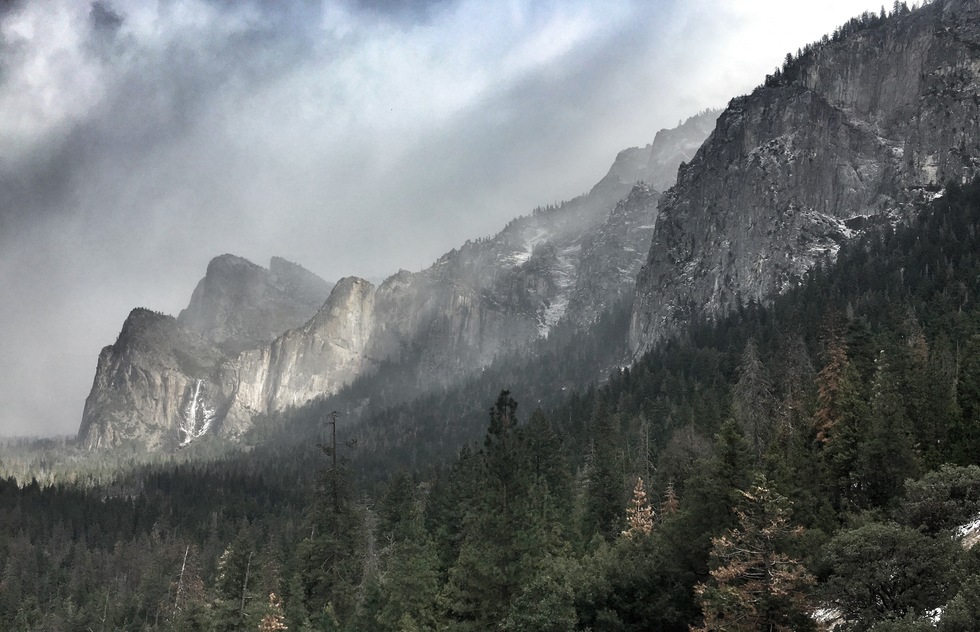 How Not to Do Yosemite in Winter

I sometimes think my real job as a travel writer is to be an idiot.

It's my job to make mistakes and then report on them so that my readers can have fun, safe, and error-free vacations. This week, I really succeeded: I almost died twice.

I just left Yosemite National Park in California. I had thought this column would be about the wonders of Yosemite in winter. And while it is wondrous, the famous granite walls made even more handsome when a light dusting of snow picks out their contours, what I need to write about today is preparation.

The Sierra Mountains are no joke. To approach them in a season when weather changes on a dime requires real planning. Needless to say, I didn’t plan at all.

Which means that I never told the city rental car company I was going to the mountains, and so I happily drove off in a cheap compact car, without snow tires, four-wheel drive, or snow chains. When I arrived at the Yosemite rangers’ gate, there in front of me were massive signs warning “Snow tires or chains required.”

But I stayed in the line of cars. Having driven the long road from San Francisco (it took five hours with traffic and a short stop for dinner the night before), I wasn’t going to let a sign dissuade me. And I purposefully chatted up the ranger at the gate, hoping she wouldn’t notice my tires. When she waved me in, I felt like I’d won something.

That something turned out to be the scariest drive of my life. A light snow was falling as I started, but I didn’t think it would have much effect on the twisty, steep roads that led down into Yosemite Valley. I was fine for the first third of the drive, but as I got to areas sheltered by trees and in shadow, the asphalt turned slick and my wheels transformed into wobbly sled runners. I started to slide rather than drive, and it really is just dumb luck that I was able to finesse the car to stay on the road—I passed other drivers who weren’t as lucky.

Down at the bottom, I found it difficult to enjoy the otherworldly beauty of the park as I was too worried about how the heck I would get out at the end of the day. I chatted up several park employees and discovered that there was a far more level road out of a different entrance of the park, one that would add about an hour to my drive back to my lodge. Bingo!

But once again my lack of preparation doomed me. I hadn’t brought a map, thinking I could rely solely on GPS. My device got me out of the park, but when I reset it to the address of my inn, it suggested I turn off the main highway onto Worman Road, telling me I was just 5.9 miles from my destination. I followed my usually trusty Garmin, but soon the road turned from paved to deeply rutted, and often scarily slanted, dirt.

In the back of my mind, I thought that I should turn back, but I kept thinking, “It’s just five miles.” I stopped for a moment, thinking I’d be able to call someone for advice, but my signal was nil. So I kept going, driving at just 10 miles an hour to keep from destroying a car that really wasn’t built for this sort of off-roading, sliding on patches of snow, and dodging bathtub-sized potholes. The sun went down, the driving grew tougher, and after about 45 minutes I came to an abrupt halt. In front of me was a massive tree, blocking the way. I had to retrace what had been the second-scariest drive of my existence.

Back on the main highway, I was finally able to get some bars on my phone, call the lodge, and get directions back.

Today, I’ll be going back to Yosemite. But this time, someone else is driving.

And I’m going to insist they have a paper map and the right equipment. Please make my idiotic planning decisions mean something. Do the same if you decide to visit one of America's great national parks in winter.