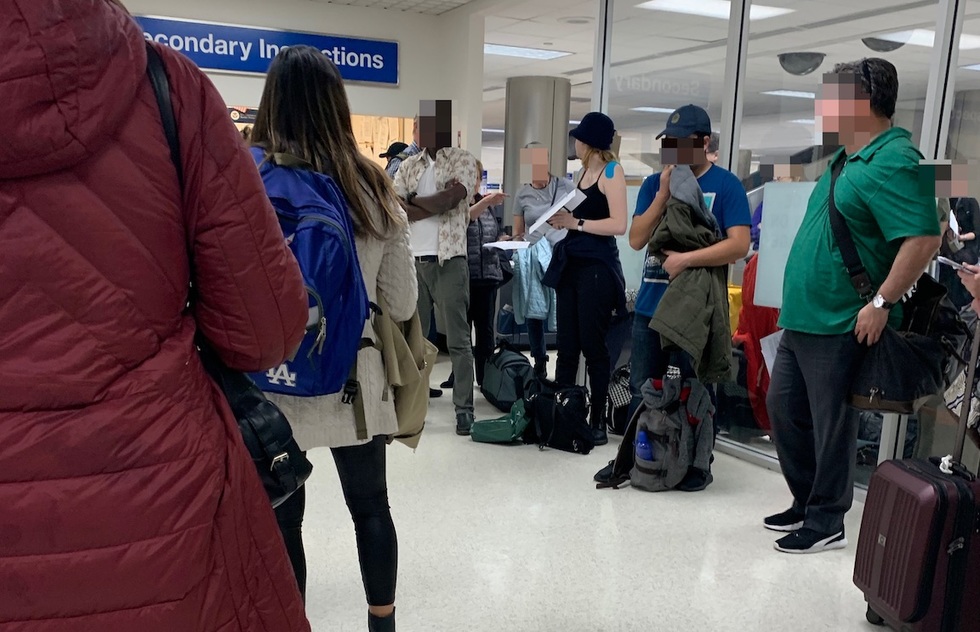 I Just Flew from the U.K. to the U.S.—Here's What That's Like Now

World systems are shutting down and entire countries are banning or expelling foreigners so that governments can take care of their own.

I had planned on spending a few months in the United Kingdom researching upcoming Frommer's guides to London and Europe, but given the circumstances surrounding the COVID-19 pandemic, my plans had to change. I decided to fly back to the United States from London while I still had the option.

I bought a one-way ticket with 24 hours' notice—fortunately, the airlines have capped fares on the very few flights that are still going, so although it was an expensive flight, I wasn't gouged.

The United States has temporarily banned Europeans from flying to America, something that many news outlets have falsely reported as a ban on all flights from Europe. The truth (as of this writing): If you're traveling with a U.S. passport and a flight is going, you can take it.

As airlines chop down their schedules because of a plunge in demand, flights are being canceled, but you might not realize that when you use an airfare search engine. You'll still see flight options come up, just not as many as there used to be.

The most nerve-racking aspect of my journey was having to leave my private apartment in London—where I had comfortably worked in casual social isolation—to brave the unpredictable vicissitudes of airports and airplanes. As I locked the front door behind me, I felt like an astronaut leaving an airlock. Who could say what I'd find out there in the wilds of space?

To minimize human contact, I prebooked a private car. I normally take public transport to Heathrow because it's easy, fast, and inexpensive. But it also exposes you to a lot of people, whereas a private car risks only one exposure.

My driver expressed some nervousness when I told him that I'd been in isolation—I had told him as a way of allaying his own fears of infection, but he wanted to know if I'd been holed up because I had been showing symptoms. We laughed for a minute when we both realized we were two (probably) healthy people who were afraid of each other. Strange times when that's what passes for social pleasantries.

Traffic out of London was minimal. I went from Southwark to the airport in about 30 minutes, which is less than half the usual time. Heathrow's Terminal 3 was operating, only it was half-empty. There are several check-in zones, but not all of them were in use. This one, which is normally hopping at this time of day (10 am), was now a place even a tumbleweed wouldn't cross:

Last weekend in Heathrow might have been a madhouse.

Otherwise, all the airport services were operational: baggage check, coffee shops, newsstands, restaurants. There were just a lot fewer people to patronize those services, and no lines.

The U.K.'s departing immigration gates are automated, so no human contact was required there. Nobody checked my temperature or asked me any health questions.

There were only two people ahead of me at the security check, so being in control of my space was easy. As a matter of fact, the drastic reduction in flights has made it easy to coast through the airport without close physical proximity to anyone. That was a great relief.

I wore a light mask anyway. Yes, I know you don't really have to if you're not sick, but the mask reminds me not to touch my face, so I'm going to wear one anyway. And if that makes strangers keep their distance, so much the better.

At Heathrow, all passengers wait in a big, mall-like holding area until their gate numbers are revealed just before boarding. Usually, it's as frenetic and as jumbled as a medieval spice market, but on this day, it was calm and had plenty of seating. 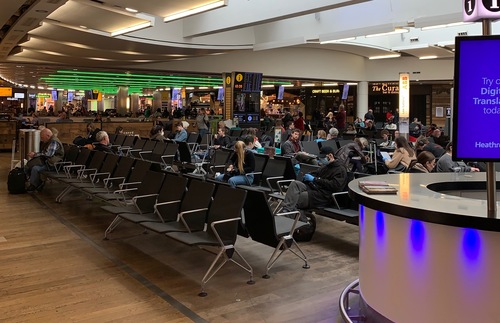 The situation was the same in the lounges. You could have your pick of seats instead of foraging for empty spots. That translated into plenty of personal space.

The closest I ever came to anyone before departure was in the check-in line at the gate. In that case, I stood about 8 feet back from the people ahead of me. No one questions holding up a line anymore—we all know why we're not filling all the available space.

The one snag at Heathrow: When I boarded, someone forgot to hand me the two forms that the U.S. government (Who are you? What's your address?) requires everyone to fill out. I had to request those forms. In times of plague, I'd prefer that details like this aren't missed.

Once seated on the plane, I was glad to see my seat-mate was as nervous about infection as I was. When I arrived at my row, she was busy rubbing down the general region with sterilizing wipes.

I don't need to go into the flight. You've been on one. The flight attendants were cheerful and behaved normally. The cabin wasn't empty but it also wasn't full, so there was enough room for everyone to space out a bit if they wanted. No one coughing, no one sneezing. You'd never know there was a virus afoot if not for the several passengers wearing face masks like bike messengers in the winter.

After seeing disturbing photos of catastrophically disorganized U.S. airports the weekend before, I was anxious about what would happen when we landed at LAX. We were told that U.S. government inspectors would board our plane and dismiss us row by row.

That's not what happened.

Instead, the whole plane was allowed to unload and enter the standard immigration control queue. There were none of the teeming crowds of passengers we all saw in the news—it seemed as if our plane was the only one at the airport that moment—but there was still a back-and-forth queue for incoming arrivals, which feels a little too confined to be the safest configuration for controlling an outbreak.

There weren't enough agents. We heard them complain to each other that they hadn't known we were coming, which seems unbelievable since we were on a scheduled flight that arrived on time.

Everyone, Global Entry member or not, was then put in a long line that snaked into a side room that was hot and clearly not well ventilated. One by one, we had our temperatures taken—laboriously and with no sense of urgency—by agents using a no-touch detector. The person who did that job also wrote our passport numbers down on the sheets we'd been given while on the plane. The government had forgotten to put a space for passport numbers on the official arrival forms, and now the collection of that information was slowing things down further.

Here are the forms every new arrival must fill out. You can see the lack of a field to include your passport number, which gummed up the process. 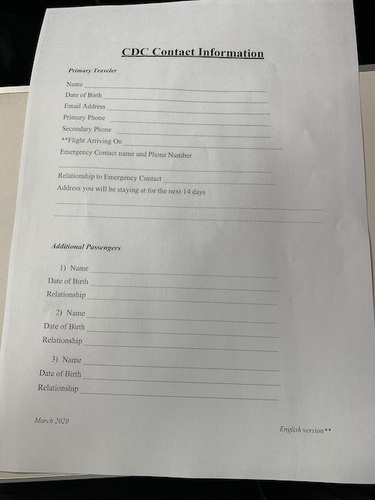 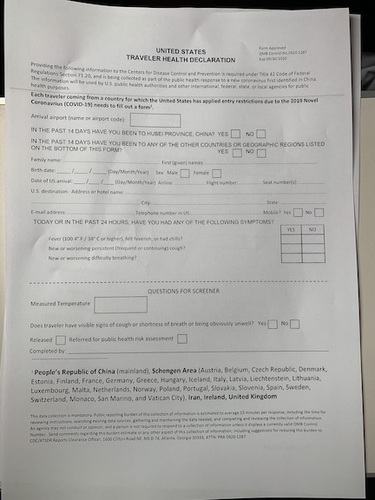 Every few minutes, those whose temperatures had been taken oh-so-gradually saw their passports placed in a stack and put on a counter under a sign reading SECONDARY INSPECTIONS. The documents just sat there. We could see them as we stood in that close, hot side room, waiting for someone to return our IDs. People began asking if they were going to miss their connecting flights. Mostly, the response they received was a wince. I saw no one pulled out of line so they wouldn't miss onward travel.

Our temperature taker, who was friendly but as out-of-the-loop as the rest of us (though he wore an industrial-grade mask), told us that every three days he and his colleagues have to re-apply to keep doing this job because the system currently only grants three-day contracts. Clearly, the government was making things a mess for him, too.

After about a half hour in this unmoving purgatorial waiting room, a CBP officer picked up the stack of passports and began giving them back. I have no idea what the point of this step had been—it didn't seem anyone did a thing with our passports—except to stick us in a room where we could not observe our personal standards for safe social distancing.

From there, we could pick up our luggage and leave.

In the end, it took about an hour for processing, and I'm not sure what was accomplished beyond taking my temperature and asking if I felt sick. The U.S. government is still not conducting inspections with enough spacing to be what I would consider safe.

A little over an hour after landing, I was finally on the curb, waiting for my ride.

The experience was mostly swift and easy. I felt like I was in control of my personal space and I understood what was happening until the moment I fell into the hands of Customs & Border Protection.

I'm sorry to say it, but of all the steps in my journey, the one that confused me the most and makes me feel the most anxious—the one that gives me the clearest cause to self-isolate for 14 days—was the one handled by the people who claimed to be there to keep me safe.