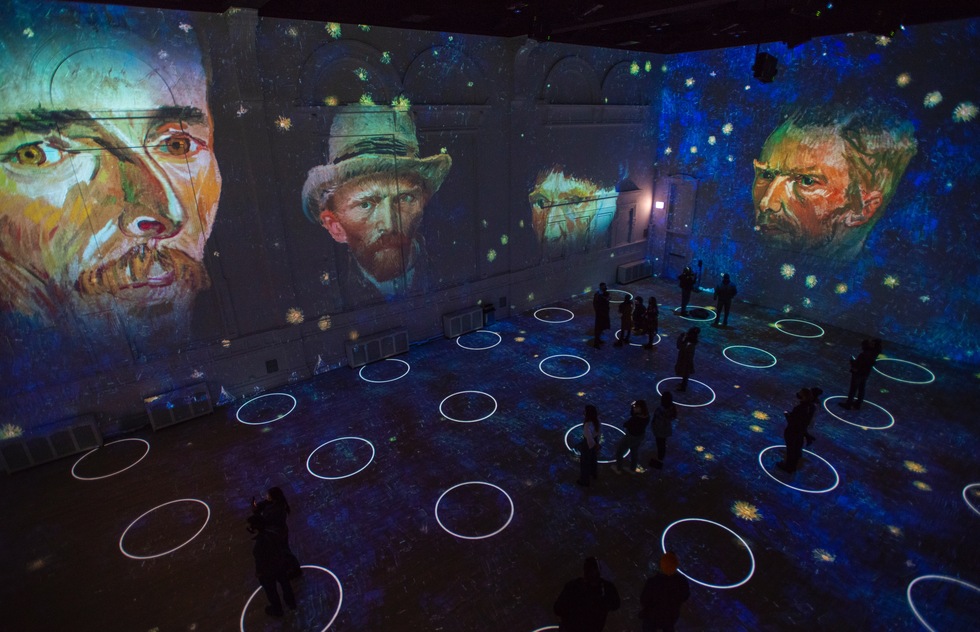 On December 1, 1883, Vincent van Gogh wrote to his brother Theo, "But know this, brother, that I am absolutely cut off from the outer world—except from you."

It was a common refrain in the artist's letters. He had a lifelong feeling of being isolated from those around him.

"Indeed, this may be a small misery," he wrote in the same 1883 missive sent from the Dutch province of Drenthe, "but it is a sorrow after all: A feeling of being an outcast—particularly strange and unpleasant—though the country may be ever so stimulating and beautiful."

Though van Gogh suffered, he was able to transmute his ache into some of the most vibrant, soulful paintings ever created. For many art lovers, his landscapes and still lifes—with their sculptural swipes of paint, swirling movement, and jump-off-the-canvas colors—exert an irresistible pull.

It's no surprise that van Gogh is having a global moment in this period of social distancing and isolation.

In the city of Tianjin in northeastern China, the EFYI Group, a drone production company, recreated some of the artist's most famous paintings, including of course The Starry Night, during an evening spectacle in December.

Filling the sky for more than 26 minutes, a total of 600 drones lit up in different colors achieved the world record for the "longest animation performed by unmanned aerial vehicles," according to Guinness World Records.

Meanwhile, Immersive Van Gogh, a high-tech sound-and-light show that originated in France (you may have seen the exhibit on Emily in Paris on Netflix) is selling out in cities across North America.

The creative team, headed by Italian light artist Massimiliano Siccardi, picks a historic structure to stage the piece in each location, making the building part of the experience.

Recently on the Frommer's podcast, I spoke with Corey Ross, one of the show's producers, about the project.

"The art begins with Massimiliano sending in a team who take all the measurements of all the space—the floors, the walls, the columns, the rafters," Ross told me. "Everything is mapped digitally and then from there he’s able to conceive of the show [and] how van Gogh’s art interacts with the architecture of the building."

That means the piece is different depending on where you see it.

"The experience you have when you walk in is like none other," Ross said. "Every surface is illuminated with the art, which is projected. We have dozens and dozens of projectors, and something like 500,000 cubic feet of projection. . . . So it’s massive in scale, which allows you to see van Gogh’s technique, his brushstrokes, his speckles, his color work, on a scale that you would never get to see it if you were looking at the pieces themselves. It also brings the architecture to life, and suddenly bricks and metal beams, which might seem really industrial, become organic with clouds or sunflowers."

To keep viewers safe, there are circles projected onto the floor to ensure social distancing as audience members move from station to station in the different rooms of the exhibit. The show has no spoken dialogue; instead, a sweeping musical score by Luca Longobardi brings excitement to the proceedings.

Reviewers have said that the experience feels like stepping inside a painting—which is exactly the idea.

To hear more about the experience and what goes on behind the scenes, listen to my entire interview with Ross, embedded above.