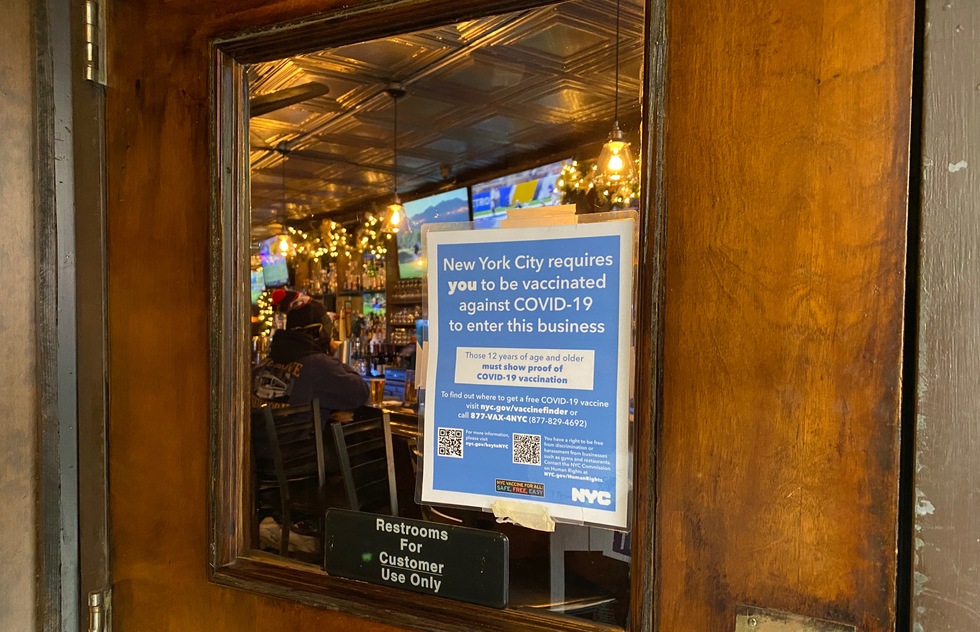 In a Growing Number of U.S. Cities, Vaccination Required for Indoor Dining

As Omicron surges, vaccination mandates are rapidly expanding in many more indoor dining and entertainment venues across America.

Nationwide, government vaccine policies are being echoed by individual business owners who have decided to require proof of vaccine—and even proof of a booster shot—before serving customers.

Although there is no government vaccine mandate for Atlanta, many local restaurants, bars, and theaters require proof of vaccine, a negative Covid test, or both for entry. Eater Atlanta has a list of venues with these requirements.

Boston Mayor Michelle Wu has announced that, beginning on January 15, 2022, people who wish to dine indoors or go to a theater, arena, gym, bowling alley, bar, or museum must prove that they've received at least one dose of the Covid-19 vaccine.

By February 15, the requirement will expand to proof of a complete course of vaccination, not including boosters. "Our essential workers have been on the front lines of fighting this pandemic for more than 650 days, and it’s time for Boston to follow the science and public health data to ease their burden," Wu said during a press conference.

The regulations apply to those aged 12 and over, but starting on March 1, 2022, children aged 5 to 12 must also provide proof of at least one dose for entry. Full vaccination for that age group will be required starting May 1.

Beginning January 3, 2022, vaccination will be required for people patronizing restaurants, bars, or fitness centers. "We didn’t want to get to this point, but we simply have no choice," Mayor Lori Lightfoot said in a press conference on December 21. "This is what we have to do to keep our health system from being overwhelmed by this new wave.”  Patrons will be expected to show photo ID along with proof they have completed their primary vaccination.

The mayor announced an exemption to this rule for restaurants and bars in the city's airports. Chicago's official website has more information.

On November 23, the city of Denver and four surrounding counties imposed a "vax or mask" rule that allows business owners to decide whether to require masks of employees and patrons or ask for proof of vaccination instead. According to the Denver Post, some 400 local businesses became vaccination-only venues.

The nearby city of Boulder, too, saw a large percentage of businesses going to a jab-only model.

Los Angeles County implemented its mandate in November. Called SafePass L.A., it governs entry to restaurants, bars, museums, gyms, salons, and performance venues. At this stage, the rules only apply to those age 12 and older. Several cities near Los Angeles, including Palm Springs (which has had such a mandate since August) have similar policies for indoor dining.

NOLA is taking a three-pronged approach to indoor venues and vaccines. Beginning January 3, 2022, everyone aged 5 and up must prove they've had at least one shot to dine or drink indoors, or go to a gym, casino, arena or other entertainment venue.

By February 1, full vaccination will be expected. The city will exempt unvaccinated patrons from this requirement if they can show a negative result from a PCR, molecular, or antigen test taken within 72 hours. Official info here.

NYC was among the first U.S. cities to require vaccinations for entry to restaurants, bars, theaters, and other entertainment venues. Children aged 5–11 must have at least one shot to get into those types of facilities. Starting January 29, that age group will require full vaccination for entry.

On December 22, famed restaurateur Danny Meyer took vaccine mandates one step further by announcing a booster requirement for both staff and patrons. Beginning in mid-January, guests at Meyer's 18 bars and restaurants in New York will have to show they've been boosted to dine or drink indoors. So far, no other Big Apple restaurants have followed suit, but that could certainly happen.

On December 21, the city council announced a vaccine mandate governing entry to restaurants, bars, gyms, senior centers, and entertainment venues. It will go into effect on February 1, 2022, and applies to everyone over the age of 11. The new law provides an exemption for those who can show negative results from a recently administered Covid-19 test. To see the legislation, click here.

Beginning January 3, 2022, restaurants and bars in Philadelphia will check either for full vaccination status or for a recently completed Covid-19 test before serving customers. After January 17, Covid tests will no longer be accepted.

Children aged 5–11 will be required to have had at least one dose of a vaccine by January 3 and to have completed their vaccination series by February 3. Those younger than 5 and those with proof of religious or medical exemptions will not be covered by these new rules. Here's a link to the official announcement.

Eater Portland lists more than 100 local restaurants that require customers to prove their vaccination status to dine indoors. This movement is being led by individual businesses, not the government, and the list of participating places is growing each week. Around 50% of them will also accept negative recent Covid test results.

Since August 20, the city has required proof of full vaccination from those who wish to dine indoors or go into gyms, bars, or other entertainment venues. You can read more about the "Safer Return Together Health Order" here. At this stage, these rules do not apply to children under age 12.

Full vaccination is required to eat in restaurants in Seattle, as well as to go to gyms, theaters of all kinds, and outdoor events hosting more than 500 people. People can also show a negative PCR test taken within 72 hours to gain entry to these venues. These rules only apply to people 12 and older; click here for the government site.

The city's official tourism site has more information on regulations as well as which attractions are open and which remain closed.

In addition to these cities' official policies, Live Nation, which runs theaters and festivals across the United States, previously announced a "Health Check" (its term) for concertgoers. The company now inspects customers' proof of vaccination or negative Covid tests, even in states where governors have attempted to forbid this type of safety policy, including in Florida.