I reported roughly a week ago that airfares for the summer took a sharp dip; and that experts were predicting that fall fares would also be low.

Sometimes it's sweet to be right.

My Facebook page has been lighting up with posts from friends who have just gotten steals (one recently got a round-trip Chicago-Miami itinerary for $106 TOTAL) and we're now seeing a lot of fare sales to all parts of the globe. Here are a few of the best international offers:

Poland's national carrier has slashed 500,000 fares, some by as much as 50%. Best rates, as you might guess, tend to be to Poland and Eastern, and though it will be chilly the sale means you could fly from New York or Chicago to Krakow or Gdansk this winter for just $664 round-trip; from $414 for a New York to Moscow jaunt; and $664 Chicago to Bucharest. LOT is also slashing prices on flights to Milan, Prague, Vilnius and several other gateways. Tickets must be purchased by September 13 for travel between January 12 and June 30, with holiday blackouts. Click on the link above for more info.

If you've ever wanted to visit Hong Kong, this coming March might be the month, thanks to a sale that slashing round-trip fares there to just $592 from Los Angeles or San Francisco. Oddly, the flight goes via Shanghai, but direct links to Shanghai from this airline are much pricier. There are also sale rates from New York City and Honolulu. No deadline is listing on the site for booking.

Dueling it out in Business Class are Air France and KLM, both of which have reduced those lie flat seats to under $3000 from NYC to Paris (currently its $2289 round-trip from Air France and $2846 on KLM). Both carriers are also discounting flights to Amsterdam, London and Rome. On both carriers, you need to book before end of day on September 3 to get these rates (for travel November 1–January 4 with blackout dates).

$549 is the nifty price for round-trips to Ireland this fall, at least from New York City. But the rates aren't all that much higher on Aer Lingus from Boston, Chicago, Washington, DC and San Francisco to Dublin or Shannon. The deal is for flights between October 25 and December 10, with blackout dates from some gateways.  Other parts of Europe are also being discounted, but remember: you'll be flying through Ireland to go elsewhere. I see no booking deadline on the Aer Lingus site. 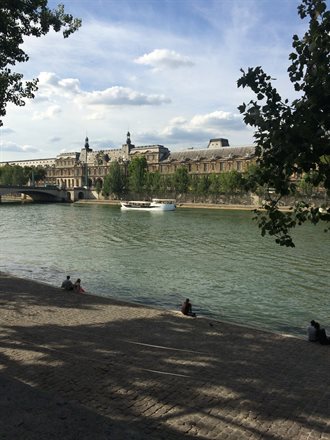 Autumn in Paris can be lovely (photo by author)