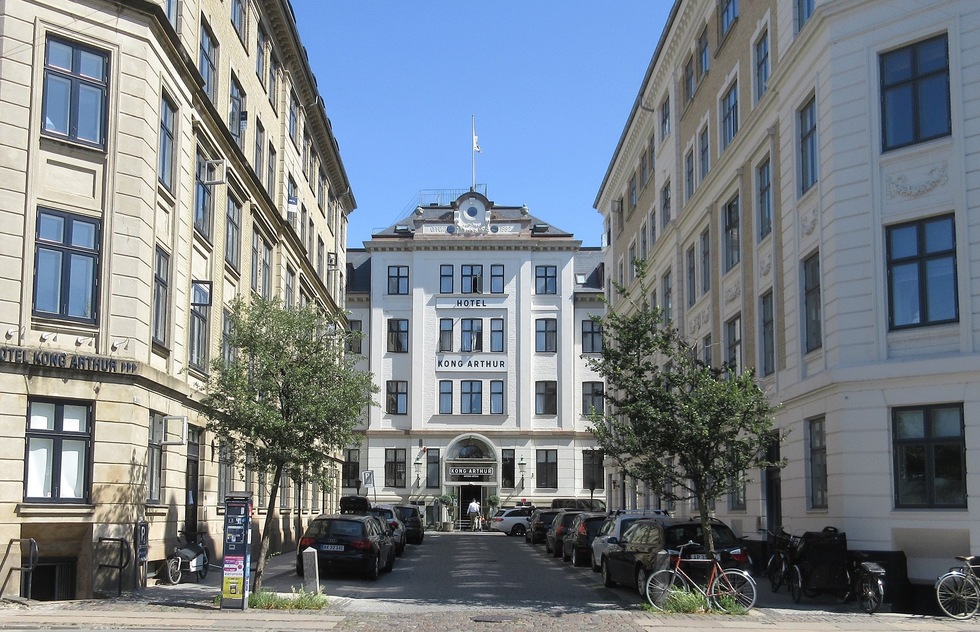 It's True: This European Country Has Abandoned Covid Restrictions

Imagine a land with no masks. No social distancing. No entry tests, no quarantine. A place where tourists can do whatever they want as soon as they get off the plane.

Imagine, in short, what traveling was like in February 2020.

That life is back.

Head to the website of Visit Denmark, the charming Scandinavian country's official tourism bureau, and you're greeted with this stark announcement: "As of Feb. 1st Denmark no longer considers Covid-19 a critical disease and is removing its restrictions."

Quite suddenly, life is back to the way it was before the novel coronavirus brought everything to a halt.

"Cases remain high—very high—but the Danes have moved on," says the Telegraph in the United Kingdom. "Even if you test positive, there is no longer a legal obligation to self-isolate."

The newspaper quotes the director of infection preparedness at Denmark’s infectious diseases agency as saying that since the Omicron variant came on the scene, "it is impossible to stop the spread of infection, even with severe restrictions." Since Covid can't be controlled anymore, Denmark officials reason, why torture ourselves further?

Denmark opened up in a similar fashion last fall, only to close up again to defend against the arrival of Omicron. But this time, the situation is different. Omicron has burned through the population at lightning speed—uncontrollable by rules, Denmark's leaders say—and is simultaneously proving to produce less severe illness than prior variants did.

Then there's Denmark's world-famous social cohesion, which is also said to be a factor in the country's success.

As the Telegraph puts it, "social consensus and trust in government have been Denmark’s hallmarks. They are what many experts believe has made it one of the world’s top pandemic performers, perhaps the best."

Denmark's death rates have been about half the average of the rest of Western Europe.

“If you have a strategy based on trust and solidarity, then you can actually open up with a relatively broad agreement," one political science professor told the Telegraph.

Denmark also leads the planet in DNA analysis of the changing virus and in collecting and interpreting data about its impact. The population's faith in the evolving discoveries of that data is leading the response.

Once Omicron took over, Denmark shifted. The country's leaders stopped worrying about the skyrocketing infection rate (seen below), because with Omicron, vaccinated people (nearly 83% of Danes have received at least one shot) are increasingly catching the virus without a significant health impact—and so locals decided to focus instead on the hospitalization rate. 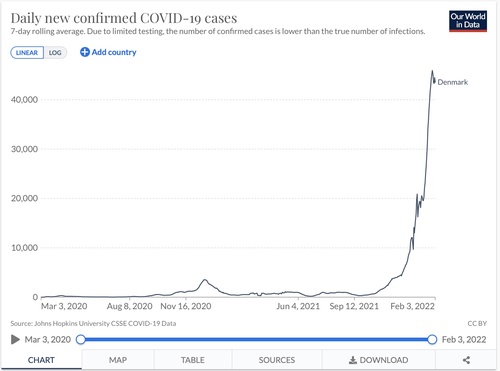 (Source: Our World in Data)

Throughout the pandemic, the Danes' top concern was about overwhelming the nation's hospitals. Although hospitalization rates remain high in Denmark, Covid-19 is not producing the same kind of illness as prior variants did, and it's not swamping the system to the point of terror anymore.

The Telegraph sums it up with a sentence that may shock many Americans: "As far as community health is concerned [in Denmark], Covid is now on a par with the common cold."

But even Denmark, where residents now indulge in the carefree post-pandemic paradise that has been promised to all of us, retains some limitations for outsiders.

All vaccinated visitors can stroll right in and snuggle up with the hygge. No tests, no quarantine—just a warm welcome. Order a Carlsberg beer. Eat some smørrebrød. Forget your mask.

The same freedom is extended to people who can produce a positive PCR test that is 12 to 180 days old. Danish data shows that natural immunity resulting from past infection is also effective.

However, there is one exclusion to the party. Unvaccinated visitors to Denmark from outside the European Union must still—even now—take a test within 24 hours of arrival and self-isolate for 10 days. (Unvaccinated Europeans can simply start their vacations after a test.)

The Danish are a reasonable people who believe in the greater good as a central principle of a happy society. Following the data has taken them this far, and they want their visitors to subscribe to the same fundamental safety measures that they believe to be effective.

Pictured at top: In the 1980s, Copenhagen's Kong Arthur Hotel was named for Frommer's owner Arthur Frommer in tribute to the thousands of tourists he brought to the city through his books and tours.