Just Two Days Ago, We Learned What It Is Like to Live in a Country Without a Decent Rail Network 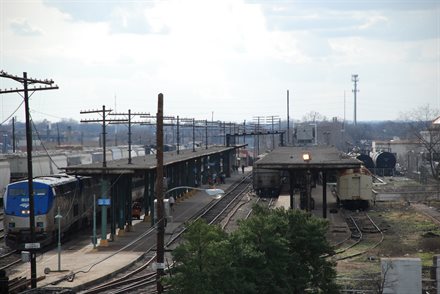 As I write this, we have gone two days beyond the realization of what it means to have no decent system of rail transportation within the United States.  Just two days ago, hundreds of thousands of Americans were stranded in their vacation locales by an extraordinary weather event of blizzards, high winds, and unprecedented low temperatures.  Tens of thousands of Americans slept in airports.  Thousands of flights were cancelled, thousands delayed, and our quality of life took a sharp dip.

And why?  Because the sole means of transportation available to us--apart from marathon-like three-day car trips--was an aviation system brought low by the weather.  There were, realistically, no trains to which we could turn.

I was one of the stranded travelers.  After a vacation on the west coast of Florida, the sole means of returning home to New York was a flight ticket.  Sensing that we should return earlier than planned, I called the airline and, by a miracle, found the only two remaining seats on an earlier flight.  We landed in Newark International Airport just two hours before it was closed for later-arriving flights.

Why hadn't I earlier sought to return by train?  Because there are no trains going north from the west coast of Florida.  Why didn't I drive across the state to the east coast and then board a train?  Because prior experience had taught me that Amtrak's trains from Miami took more than 24 hours to reach New York, if not longer.  Most of the time en route, they stayed motionless on a side track to permit priority-enjoying freight trains to pass by first.  Such trips, in extraordinary conditions, sometimes took up to 36 hours.

The distance from Miami to New York, by train or car, is about 1200 miles.  That's a short six-hour trip by high-speed train in other lands.  From Spain to China, travelers can now traverse twelve hundred miles in much less than six hours.  By contrast, just getting to an airport in the U.S. and checking in two hours in advance, takes three hours, to which you add two and a half hours aloft, and then two hours to deplane and get home.

So there you are.  The lack of a decent rail system in the United States leads to hardships of the sort that Americans experienced two days ago, and will probably experience with growing frequency in the years ahead.  Because of stubborn ideological resistance to the creation of a network of high-speed rail in the U.S., we are relegated to periodic declines in the quality of our travel lives.  We are made to confront the option of spending three days in a car, or a similar time vegetating at shut-down airports.

When will we take the much-needed steps of joining the world of technological advance, which means high-speed trains?  When will we do what the rest of the world has resolved to do, ending our reliance on over-burdened, snow-covered highways and on an over-burdened airline industry?

Join me in advocating for high-speed rail transportation.