Drivers now need to adopt the same mindset, because on June 1, one of Sin City’s most beloved traditions was trashed. Don’t worry, the dancing fountains are still sloshing away. But on June 1, nearly half of the hotels on the Strip instituted parking fees—a new normal after decades of free parking inside those cavernous resort garages.

MGM Resorts is behind the move, and by the time you read this, Mandalay Bay, Delano, Luxor, Excalibur, MGM Grand, Aria, New York-New York, Bellagio, Vdara, The Mirage and Monte Carlo will all have instituted parking fees, for both valet and self-parking. You’ll get one hour free at all of the above, time enough to lose a few hundred at the craps table, but not to take in a show, dance at a club or dine at a restaurant. For Excalibur, Luxor and Monte Carlo, self parking is now $5-$8 and valet is $8-$13. At Aria/Vdara, Bellagio, Mandalay Bay/Delano, MGM Grand, Mirage and New York-New York, fees are even higher, with self-parking going for $7-$10 and valet for $13-$18.


But don’t get too comfortable with those numbers. During events at T-Mobile Arena, all that might go out the window, with surge pricing going into effect, as well as possible refusal of entry…even if you’re trying to park at your home hotel. (Note: we’re not making this up, this is what MGM has announced).

To be fair, MGM wasn’t the first to try to lift the bottom line with parking fees: Mandarin Oriental and Four Seasons have been charging $30 and $22, respectively for valet parking for some time now. (And no, you can’t self-park in resorts as sniffy as these two).
advertisement 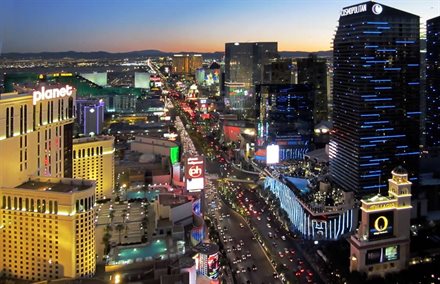 All this only adds to the litany of Las Vegas fees that have become commonplace in the last two years, of which the “resort fee” (averaging $25 a night) is the most insidious.

It all speaks to a fundamental shift in the economy of the city, and the fact that gambling has been outstripped by clubs and concerts, in terms of dollars earned.

So what’s the penny-pinching traveler to do? Going without a car isn’t the solution, to my mind, as many of the best of the more affordable restaurants are well off the Strip, as are such superb attractions as The Atomic Testing Museum, Hoover Dam, the Mob Museum, Springs Preserve and Red Rock Canyon. Instead, consider staying Downtown or at one of the Strip resorts (like Encore, Wynn, Harrah’s and the Venetian) that do not have parking fees…yet. I give ‘em 6 months tops until they add on the fee. In fact, I’d gamble on it.