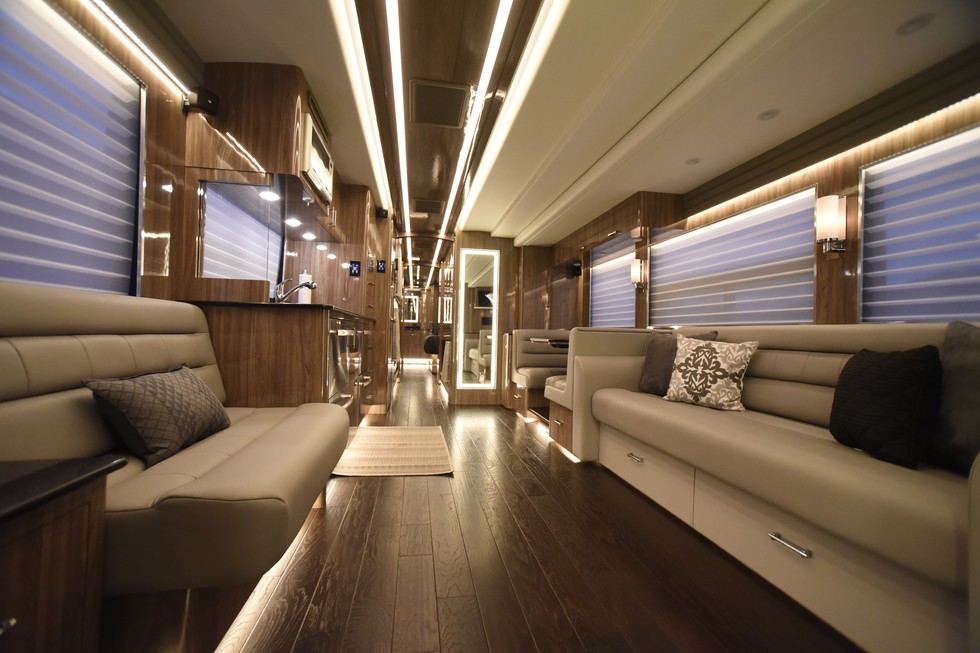 There’s a certain flavor of fear that comes from trying to do something potentially dangerous that you are in no way competent to do.

I experienced that intense mix of panic and embarrassment while trying to park a Class A motor home for the first time. Eventually, my husband had to slide into the sweat-soaked driver’s seat and finish the job. Piloting the mammoth vehicle was just one of many of the tasks that intimidated me on that first RV vacation (and forget dumping the waste tank!).

But now, thanks to Covid-19, it’s possible to have an RV vacation that not only omits those tasks but could also accurately be described as a "rock star" experience.

That’s because one of the largest bus companies that serves bands of all genres, Hemphill Brothers, is now staying afloat by renting the tour coaches (with drivers) that would usually be occupied by Journey, Cher, Bon Jovi, Justin Timberlake, or TobyMac to civilians like you and me.

The Almost Famous treatment doesn’t come cheap. Daily rates average $1,500 a day, according to the company's co-owner, Joey Hemphill. But since some of his buses can sleep up to 12 people, costs could potentially be amortized if you go with family, friends, or your favorite garage band.

The price includes the services of a chauffeur who holds a commercial driver’s license, and because of the company they drive for, you'll know they're cool enough to hang with rockers. When he or she needs to rest, the driver will either sleep in a bunk on board or in a nearby motel. The busses can be rented directly through Hemphill Brothers, at the link above, or through RVShare.com.

If you rent what Hemphill calls a "star bus" (as opposed to a simpler bus that usually carries crew), you get a large, luxurious suite in the back with queen-size bed, a full bathroom, and, usually, a makeup area. The vehicles are kitted out with high-end TVs, state-of-the-art sound systems, convertible couches, bunks, and lots of storage. These babies have plenty of horsepower, too; they were designed to motor for up to 1,000 miles before having to stop to refuel.

Travelers have been turning to these vehicles recently, according to Hemphill. He says many use them "like a cruise"—meaning they go sightseeing during the day and then ride all night to the next destination. "Some of the best sleep in the world is riding on a bus," says Hemphill. "The sound of that motor—it’s very cozy."

Golf and fishing trips have been popular, though some are using the buses as high-end moving vans. Hemphill's luxury coaches have transported elderly people who didn’t want to fly across the country to live with relatives. Another affluent family used a bus to move to Florida—and brought with them two crates of chickens and two very excited cats.

But as a man who is used to catering to rock stars, we're guessing Hemphill has seen stranger things.