Marriott Urges Guests to Tip Housekeepers to Overcome the Shortfall of Inadequate Wages—Say What?

Marriott is placing pre-printed envelopes in 160,000 rooms to encourage guests to express "gratitude" to its workers in the form of cash. The initiative, called The Envelope Please, purports to be about making hotel workers feel "seen and validated" and less "overlooked."

In its press releases touting the initiative, Marriott did not exactly say that we ought to tip because its workers are underpaid, but everyone knows room attendants aren't paid much, and in partnering with Maria Shriver, a woman who works publicly to fight poverty among women (a connection mentioned in the announcement), its message was implicit. (You can read the press release here.)

It's truly bizarre that Marriott's executives seem to think we wouldn't spot the source of the problem. Sorry, but isn't it Marriott's job as employer to make sure its employees earn a living wage? Isn't it tending to the needs of its workers? What kind of business admits so publicly that its staff is having trouble? After charging guests hundreds of dollars a night for a room, hotels actually have the audacity to take up a collection basket to feed its workers properly.

And as best-selling labor observer Barbara Ehrenreich recently pointed out, "September 2014 was probably not a tactful moment to introduce The Envelope Please: In August, hotels had just achieved a $2.25 billion high-water mark in their income from surcharges, double the amount they got in 2003."

Cleaning rooms is back-breaking, dirty work, and the median income for what used to be called a chambermaid in America is only $9.51 an hour, according to the Bureau of Labor Statistics—and we all know that's much less than a living wage in many U.S. cities.

Urging guests to tip is a way for hotels to get away with underpaying their employees. I call it Tipping Creep—it's the way more and more industries are justifying cuts in their payroll expenses by shifting the burden to the customer. If hotels put the onus of a living wage on the backs of the guest, where it never used to be before, that translates into more profit.

Marriott reported a profit of $192 million in the second quarter this year, up 7.2% from the year before.

Marriott, by the way, is the same company which was just slammed with a $600,000 fine by the Federal Communications Commission for using equipment to jam customers' Wi-Fi hotspot signals so they would be forced to purchase Wi-Fi from the hotel. (You can read the FCC order here.) The hotel chain agreed to the fine, but complained that the FCC's rules forbidding such an insidious practice weren't clear enough.

Low wages are the hotel industry's fault. It's grotesque to watch it try to shift the burden of running an honorable business to the customer by implying guests have been ungrateful all these years.

Don't we see what's happening here? Here we have a corporation that is using a respected and admired celebrity—one that grew up with the privileges of the Kennedy clan, which carries its own icky class-related undertones—to prod guests to give its workers more cash so it won't have to.

There are lots of reasons to be suspicious of tipping your room cleaner. One is that your housekeeper is often different each day; the person who did a great job today may not get the money for that tomorrow. Another is that there simply isn't a universal social practice (although the American Hotel and Lodging Association, an industry group, suggests $1 to $5 a night). We know restaurant servers get between 15 and 20 percent for typical service. But few of us would agree on what a housekeeper should even receive.

But there's no question that hotel staff are being squeezed by their employers. Ehrenreich says you should tip, but do it very grudgingly. "By tipping, you are acceding to an economic arrangement based on severe inequality. In fact, you are inadvertently subsidizing a company that profits from and perpetuates this inequality"

We should rather be demanding that Marriott explain to us why its employees are so underpaid that they need a handout. 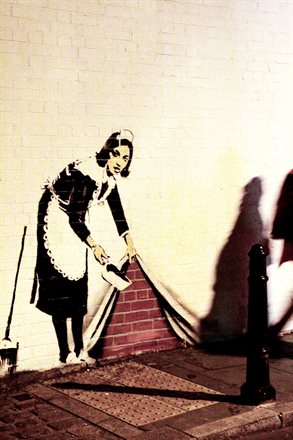