Two of the biggest tourist attractions in the world are about to see extreme changes. Disney Parks has announced that it is planning two epic Star Wars-themed expansions for Disneyland in Anaheim and Disney's Hollywood Studios near Orlando.

The announcement was made by the president and CEO of The Walt Disney Company, Bob Iger, at Disney's biannual fan event, the D23 Expo, in Anaheim.

“We are creating a jaw-dropping new world that represents our largest single themed land expansion ever," said Iger, who went on to explain that each land would take up 14 acres. That kind of space will necessitate the destruction of some older attractions. Iger didn't elaborate on how the two parks would make room, but it's widely speculated that Disneyland would lose Big Thunder Ranch, at the back of the park, while Disney's Hollywood Studios in Florida would redevelop the space occupied by its Backlot Tour, which closed last year, and its Magic of Disney Animation exhibition, which closed July 12.

An opening date was not given, but Disney is known to be slow to build, so expect a 2017 or 2018 ribbon-cutting. The price tag has also not been released, but considering the last expansion approaching this size, Cars Land at Disney California Adventure, cost $1.1 billion, it's safe to say Star Wars land will require a multi-billiondollar budget—and to pay it back, will dominate Disney's vacation-planning marketing for years.

A Disney Parks press release that was issued immediately after the announcement. "These authentic lands will have two signature attractions," it read. "Along with the thrilling battle experience, another attraction puts guests behind the controls of one of the most recognizable ships in the galaxy, the Millennium Falcon, as they take on a customized secret mission."

The following artist renderings were also released by Disney Parks, which, with characteristic secrecy, did not specify which theme park each depicts.

Disney has been playing catch-up to Universal's resorts, which have enjoyed major expansions fueled by the Harry Potter franchise. The Star Wars franchise may seem played out to the older generation, but don't be fooled. Kids have rediscovered it though the many TV shows and video games put out by Disney—and a new set of movies will refresh the franchies yet again when they are released starting this fall. The move gives Disney something to attract tenns that have grown out of the princess phase.

Disney's Hollywood Studios, too, is in dire need to rehabilitation—it's the least popular of all the Disney theme parks in Orlando. More announcements at the D23 Expo:

* Disney's Hollywood Studios in Florida will see the addition of an 11-acre Toy Story Land. Like its counterpart at Walt Disney Studios near Paris, it's intended for small children, or as Disney likes to put it, "for all ages," which addresses one of Hollywood Studios' current failings. The two rides announced for the American version are a Slinky Dog roller coaster and a Little Green Alien spinny flat ride; details were not supplied but from renderings, it looks similar to Mater's Junkyard Jamboree at Disney California Adventure. Between this and Star Wars Land, Hollywood Studios will be the most transformed Disney park.

* The official name of what has been termed Avatar Land, the expansion going into Disney's Animal Kingdom, is Pandora—The World of Avatar. That section is expected to open in early 2017. It main flying ride will be called Avatar Flight of Passage.

* Disney's Animal Kingdom, which until now has closed in late afternoon or early evening, is building infrastructure to allow it to operate after dark. Those additions include sunset-like lighting on Kilimanjaro Safaris, live hyena (which are nocturnal) and a new water-and-light show, Rivers of Light, now under construction near Expedition Everest.

* In 2016, the popular ride called Soarin'/Soarin' Over California at Epcot and Disney California Adventure will get a new film that was shot at world landmarks (the Great Wall of China, Monument Valley, etc.) and be re-titled Soarin' Around the World. Late this year, the Star Wars-themed Star Tours rides will also be updated with new animation that accounts for the new Episode 7 movie, The Force Awakens. And in early 2016, Anaheim's Space Mountain will receive a temporary Star Wars overlay titled Hyperspace Mountain. 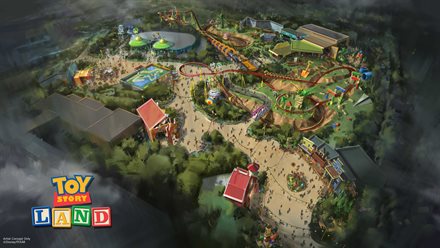 Frommer's guide to Orlando and Walt Disney World was awarded the best guide in the world by the Society of American Travel Writers. Get it here.