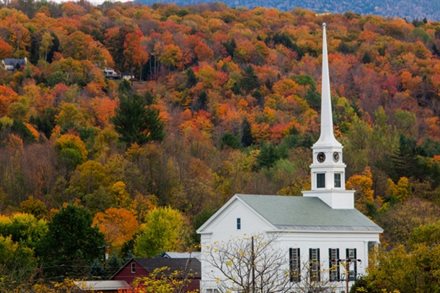 First the bad news: leaf-peeping along North America’s eastern seaboard, and in the inland areas of New England, may not be quite as vivid an event as it usually is in 2015. Yankee magazine, which keeps a meteorologist on staff to make such predictions, is just one of the many voices predicting less color.

“It’s going to be a little bit of a mix this year because we had one of the fiercest winters in history. So that really cold weather kept the moisture content down. Then we had a really dry spring through May, just at the time when the trees were sending their first leaves out, followed by a lot of rain in June, which added further stress on the trees,” explains Mel Allen, the Editor of Yankee. “Some areas are reporting leaf fungus because of the extreme wet.”

But that doesn’t mean you should cancel your fall foliage vacation. Allen recommends creating itineraries that can be changed as you go along, and that start a bit earlier. “Our meteorologist Jim Salge is saying that the coastal areas will be especially bright and rewarding, but in the uplands, the visitor should be ready to be more flexible,” advises Allen. “If they’re not seeing what they want they should be willing to travel 20 miles or so until they do.”

All is not lost, of course. “Mother Nature always produces a spectacular show. It’s just a matter of degree,” notes Allen.

And beyond the leaves there are numerous reasons to head to New England and the rest of rural Northern America this fall. Here are just a few:

The Fastest Zipline on the Planet: That would be the claim the Stowe Resort in Vermont is making, which debuted this thrill ride in the summer of 2015. It starts at the top of Mount Mansfield (the tallest mountain in Vermont) and zips passengers down to the bottom, via three different, consecutive lines. For more information, go to www.stowe.com/activities/summer/ziptour. The line will operate through October 18.

An Apple Festival and a Taste of History: Old Sturbridge Village in Massachusetts offers up a masterful take on what rural life would have been like between approximately 1790 and 1830, with perfectly restored barns and homes, expert “re-enactors” and informative tours. For the first two weeks of October—the likely peak season for the leaves in this part of the world—it will be having its yearly apple festival, featuring music, food and more. To learn about Sturbridge, go to www.osv.org

Discounted Cunard cruises: Procrastinators are being rewarded with excellent discounts on fall sailings between Quebec City and Brooklyn, NY (or vice versa) which are dropping the rate for a one-week cruise to just $499 through early October. The ship is the Queen Mary 2 and we found these rates at VacationsToGo.com, though they should also be up on other discounter’s websites.

To see Yankee Magazine's moving map on where the foliage is best, click here.