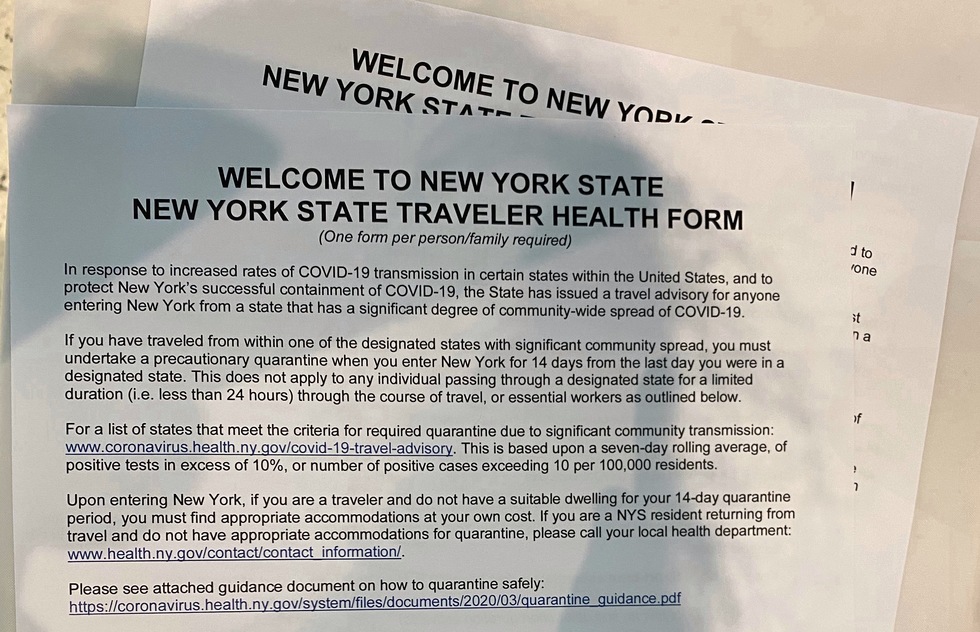 Miss Broadway? You Can Still Perform Safety Theater at the Airport

On Sunday, a family emergency required me to fly from Nantucket, Massachusetts, to New York City. As I was heading out of the secure passenger area toward baggage claim at JFK International Airport, a laconic guard muttered as I passed by, "You gotta go to that table."

I'm a rule follower, so I went where he pointed. What I encountered will likely become more and more common for air travelers in the coming weeks.

On a folding table sat a stack of one-page forms (pictured above). Nobody was manning the table. I looked back at the guard to see if he was monitoring my compliance, but he was in conversation with another guard at that point, and neither was watching me.

The form asked for my name, address, travel schedule, flight and seat number, email address, and telephone numbers. I also had to check boxes relating to my health in the last 24 hours. Did I have a cough, a fever, difficulty breathing, or the realization that life is but a dream? No, no, no, and I made up that last one to see if you're still reading.

No one was around to take my temperature, though that happened back at the Nantucket airport when I checked in for my flight. Nor was I asked any follow-up questions. I scrawled my replies and put the form in a cardboard box that looked as flimsy as this protocol felt. The slit cut into the top of the box for depositing completed forms was jammed with other papers I had to jostle a little before mine would fit.

Filling out such forms is one of the many new health measures confronting air travelers. The trade association Airlines for America has announced that the U.S. carriers it represents (American, Alaska, Delta, Hawaiian, JetBlue, Southwest, and United) will start asking health questions at check-in for every flight.

The queries will be the same as those I answered at JFK, along with a question about whether the flyer has had any contact with anybody who has tested positive for the coronavirus. Airlines for America says that travelers will also be informed about the expectation to wear masks on flights.

Frontier Airlines, though not part of the industry group, will be asking the same questions.

But will meaningful information actually be gleaned from these slips of paper?

Studies show that as many as a quarter of patients routinely lie on health questionnaires. And those people are seeking medical help in a doctor's office!

Passengers in airports, on the other hand, are trying to fly somewhere. Will those who've had a cough or encountered someone with Covid-19 volunteer that information at the airport check-in counter? Especially if the confession would thwart their ability to check in?

Of course, it might be true that asking would-be travelers to self-report their symptoms is better than doing nothing. And maybe letting passengers know about the requirement ahead of time will persuade some of the sick to stay home (obviously the responsible course of action).

But my guess is that a significant number of travelers will simply lie.

In which case, the health questionnaire is less of a genuine safety measure than a script for some safety theater.

Bet you thought you weren't going to get to see any theater in 2020, huh? Go to an airport and you'll get to play a starring role. Take a bow!