Munching Your Way Through Melbourne History: The Queen Victoria Market 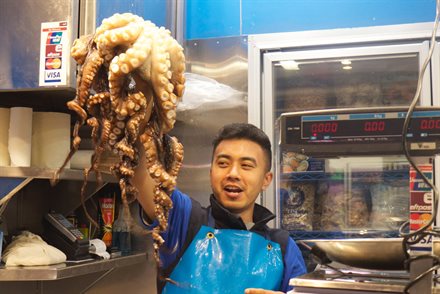 Sydney, The Reef and the Rock: those are the three “constellations” that shine most brightly in Australia’s tourism firmament. But there’s a good argument to be made that Australia’s second city, Melbourne—which at one time, due to an 1850’s gold rush, was the continent’s most celebrated metropolis—shouldn’t be overlooked. Built far later than Sydney (the mid-1800’s rather than the 1700’s), it somehow retains more of a sense of history than its skyscraper-happy cousin does. Walk around most corners and you’re likely to come upon another Victorian­–era wedding cake of a building, all glittering tile, round lamps and happy arches.

And none are as redolent of the past, yet briskly in tune with contemporary Melbourne, than the wonderful Queen Victoria Market. An unofficial gathering place for merchants since the 1850’s, the first indoor halls of the market opened in 1878 to house dairy merchants (you can still see the signs extolling butter and milk above booths selling other products today). The next expansion covered the meat hall (which today holds both fish and meat) and eventually the need for space became so great that, after World War I, a no-longer-in-use cemetery was covered over to allow for more outdoor stalls. (Around 10,000 people were buried there, but the remains of only 2000 were reinterred so, apparently, sometimes an old bone makes its way up to the surface, startling both vendors and customers).

You’ll feel history alive in the meat and fish hall where “spruikers” bellow out their offerings in a sing-song baritone that cuts through the air, as it has for decades. When the market is crowded, it’s near impossible to speak over the din of these vendors shouting out the glories of never-frozen dry scallops, native wagyu beef and fresh lamb. But take a look at the cases and you’ll see that not all is traditional here: taking into account the diets of Melbourne’s vast immigrant population, many stalls sell goods that would have been unknown in these parts a decade ago. These include various and sundry innards for Eastern European and Asian stews, female pork (considered to be more tasty by some Asians than meat that comes from a male pig), and, in the nearby delicatessen area, such international treats as borek (Middle Eastern savory pastries) and pho (Vietnamese noodle soups).

This being Australia, part of the fun of dining here—and one can easily make a meal by grazing from stand to stand—is trying the Down Under-only specialties. To that end, there are a number of stalls selling such items as peppered kangaroo jerky (and fresh kangaroo meat), emu and even wallaby. Make the mistake of waxing nostalgic about how adorable these critters are and you’ll get a stern lecture about how eating indigenous animals is far more ecologically sensitive, as they can live off the native grasses and are therefor much less a burden on the land than herds of cattle and sheep. Australia’s mineral-rich soil also produces wonderful vegetables and fruits; local farmers have gotten creative with them, so you’ll try a lot of hybrid varieties as well as such novelty items as “black garlic” which is put in a fermenting cellar for a month before being sold, and can be squeezed onto bread as a delicious, slightly vinagery spread without any cooking.

You can discover all this on your own, but I’d recommend taking the Foodies Dream Tour (www.qvm.com.au/tours/foodies-dream-tour), which sets off at 10 am every Tuesday, Thursday, Friday and Saturday and includes generous tastings at various parts in the market. It costs A$40, but afterwards you will not need lunch and you may have purchased dinner as well!