New Kiosks Cut Border Control Waits By a Third, But Your Airport Must Ask for Them

In June, Chicago's O'Hare installed 32 kiosks that scan documents for incoming passengers. Right away, despite the fact summer travel was at its peak, wait times were chopped by 33%.

The technology is called Automated Passport Control, or APC, and it's the latest effort of U.S. Customs and Border Protection to use technology to cut paperwork and frustration. O'Hare is the first American airport to install it for the benefit of its customers. (There's a second, pre-clearance APC facility in Vancouver.)

Instead of filling out one of those long blue Customs declarations forms, an inbound passenger scans their passport page and presses a few touch-screen buttons to fill in information such as their flight number. That produces a slip of paper that they present to an inspections officer, who admits them officially to the country. By eliminating the need to scan each passenger in turn, border agents concentrate on appraising the passengers, not shuffling papers, and the line zips along faster.

The government provides the software, and it has no plans to charge passengers a fee to use it, but the airport has to buy the kiosks. Technical and security testing takes about 16 weeks. That means provided it uses a kiosk design that's already been proven elsewhere, your home airport could slash its wait times four months from now.

Earlier this summer, Arthur Frommer told you about Customs-and-Immigration waits as long as four hours at some international gateway airports. Imagine if those could be dramatically reduced simply by implementing the kind of technology most of us were using at ATMs 15 years ago.

There's an incentive for both airlines and airports to spring for the kiosks, since according to the Chicago Sun-Times, O'Hare's APCs reduced the number of people who missed connecting flights by 62% at United and 76% at American.

"There's only so much room in the inspection area," a Customs and Border Protection representative told me. "With concurrent arrivals, the airport, as much as the CBP, wants to get passengers out the door as soon as possible after arrival."

How does APC differ from the other kiosk-oriented fast-track program, Global Entry? In that one, which costs $100 for five years, participants have already been pre-cleared by officials through background checks, fingerprints, and pre-interviews, so they do not stop for an interview at the border. APC, however, is free to use and because any American citizen use it, it still requires a quick face-to-face with an agent, albeit with a receipt in hand that has been produced by the kiosk.

A CBP representative says that the agency is currently working with other airports that "have voiced interest in these kiosks." The government doesn't reach out to the airports—the airports have to ask the government for help installing the technology. 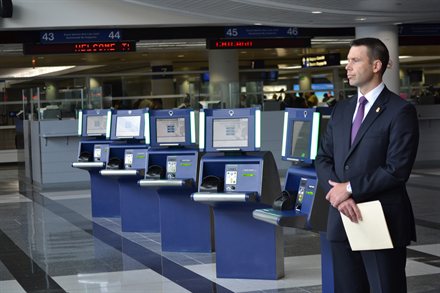