About five years ago came the parade of pork, in every form under the sun, the fattier the better. That trend was followed by the “Cronut” phenomenon: normally sane people getting up at 4 am or earlier to wait online in front of a tiny bakery to taste an unholy marriage of croissant and donut. But since New York City taste buds often set the agenda for what’s eaten across North America—don’t believe me? The “cronut” was briefly sold by Dunkin’ Donuts!—I think we can all applaud the fact that Big Apple chefs seem to have finally discovered—drum roll please—vegetables.

It’s very good news for visitors to Gotham, who will discover the heretofore hidden depths of flavor a carrot can carry, if coddled correctly. And boy, are veggies getting the royal treatment in all sorts of eateries, from high-end palaces of gastronomy to hip new-style cafes.

The leader of this revolution is Amanda Cohen, the chef/owner/spitfire behind Dirt Candy (86 Allen St., www.dirtcandy.com), a massively popular vegetarian eatery that was one of the first in the city to make eating green stuff really fun. Butter is one of the reasons, as is cream (she doesn’t stint on either), but I’d say Cohen’s sense of the absurd is just as crucial. It’s plain hilarious to crunch down into a “broccoli hot dog” slathered in tangy BBQ sauce or slurp up a herbaceous bowl of kale “matzo ball” soup, especially if your dessert is a luscious chocolate tart….in a crust formed from carmelized onions (it works, trust me). So successful has Cohen’s formula been that she’s managed to more than triple the size of her restaurant, while keeping a waiting list of over two months for a table. (Tip: there are now about 15 spots for walk ins, so just head on over early or late in the evening if you can’t snag a reservation). And for New York City, the prices aren’t bad at about $22 for a main course with no tipping allowed. 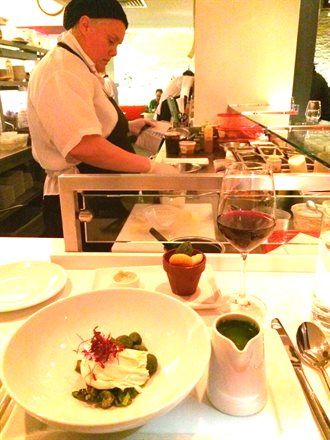 (Kale matzo ball soup at the bar at Dirt Candy; photo by the author)

Not far from Dirt Candy, and also on Manhattan’s Lower East Side, is El Rey Coffee Bar & Luncheonette (100 Stanton St.; www.elreynyc.com) which serves some seafood, but mostly wild-looking vegetable dishes—really, they’re like a jungle of roots and vegetables and lettuces exploded atop a plate. The names of the dishes are as deceptive as the name of the restaurant (which serves dinner as well as lunch). Chicharrones turns out not to be pig skin but fried wheat crisps topped with a blizzard of ingredients—candied peanuts, jicama, watermelon radishes, cucumber, cilantro sorrel, sumac and a sauce that’s a happy mélange of traditional hot sauce, nut cream and Mexican camoy sauce (its fruit based). The “falafel” uses raw chickpeas not fried, again with lots of greens atop a lovely warm pita bread; a healthy dose of zatar spices gives it the traditional falafel flavor. And the kale salad, made with an almond milk dressing, may well be the best of its type I’ve ever tried. El Rey has just 11 seats, but many take their meals to go to a nearby park for a picnic; most dishes are $7-$14.

And on the pricey-end side of the scale is Brooklyn’s Semilla (160 Havermeyer St.; www.semilla.com) a tasting menu-only restaurant, where diners sit along a rectangular bar so that they can watch the culinary theater of the staff painstakingly preparing the delights to come. Semilla calls its menu “vegetable forward”, which means that meats and fish can be eliminated entirely, and are generally used as an accent note, rather than as the main event. Which makes sense when you’re going to feature such odd and delightful plant products as geranium oil and knotweed (the latter is green and tastes like rhubarb). Recently I had a salad there that was as sinful as any dessert: it was topped by crème fraiche and cocoa nubs, and made up of winter lettuces, which apparently have a higher sugar content than those grown in the temperate months. It, and the rest of the meal, were superb and special enough that I didn’t feel taken having spent $75 on the multi-course meal.

So kids, eat your vegetables when you come to New York City. You’re going to be in for a treat if you do.