Nickel and Diming at Sea: Extra Charges for On-Board Entertainment 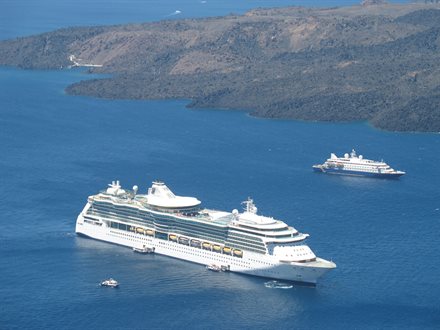 There have been times I've felt that someone should be paying me for sitting through the shows that pass for entertainment onboard some cruise lines. That being said, cruise ship entertainment has been getting better in recent years (hurray for Blue Man Group!). But with this improvement, it seems, will come a price tag.

Carnival Cruise Lines is already charging between $20 to $150 (for VIP seats) for concert seating during its Carnival: LIVE cruises, which feature one concert from a guest artist. Among the names Carnival has gotten for these specialty cruises have been Styx, Jewel and Lady Antebellum.

But Royal Caribbean may be about to make a real game changing move: charging extra for the shows that go out with EVERY voyage. Yesterday, in a Google Hangout, Nick Weir, the VP of Entertainment said ,in a response to a question, that Royal Caribbean would likely consider charging for entertainment in the future. He drew a parrallel between paying for specialty restaurants and shows. His answer overshadowed the point of the hangout, which was to announce the additional of live streamed concerts from a number of name performers, on board RCL ships in the near future.

We can hope that this change isn't on the near horizon. But my guess is that it is. All segments of the travel industry have gotten much more aggressive about charging for services that were once free. There's no reason why the cruise industry would be any less ambitious about upping the bottom line. But with this move—if it happens—travelers will have one more item to budget for when they choose to cruise. Or they may end up booking another type of vacation altogether. I'll be interested to see what is the straw that breaks the camels back with this incessant nickle-and-diming.